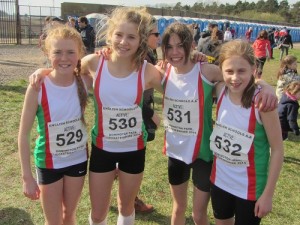 It was a challenging journey just to get to the race – fog caused cancellation of the flight to East Midlands and hurriedly we rebooked onto the ferry and then ended up getting a train from Weymouth to Southampton on the Friday night and then just managed to get a hire car to drive up to the race in time.  So all considered the athletes did well just to get to the start line. Preparations had been hindered with various athletes carrying or recovering from injuries, but Danny Ray was the stand-out performer placing 24th in the Intermediate Boys race.  Ed Mason having further recovered from the illness that hampered him in the previous weekend’s Inter Counties placed mid field and he has a further year in the age group.

Jessie Staples and Amy Dallamore both have another year in the Junior Girls race and did well with 143rd and 287th respectively with Indi Gallagher splitting them in 243rd.  Alex Rowe’s calf injury hampered him – continuing his bad luck from being badly spiked in last year’s race, but still managed to finish in 239th.