AFTER months of research, input, checking and re-checking by SPORTSPROM’s Michael Batiste, the 2013 GIAAC Yearbook is now complete and available.

The book is a much enhanced version of its predecessor with several new aspects, not least a full list of senior, all-comers and junior age-group records.

Alun Williams said this of the book which would not be so comprehensive and accurate without the many years work of athletics statistician and former Guernsey athletic legend Ray Hollis who kindly offered his groundwork to the club:

‘The publication of the 2014 records book is a great celebration for the club.

‘As always it is a benchmark that identifies the progress of our athletes.

‘My forward to the book talks about ‘effort, growth and success’ being the key themes of 2013 for the club and that is reflected in the hard work personified by the 15 new entries recorded by 10 athletes.

‘In particular, we need to congratulate our younger athletes such as Cameron Chalmers, Edward Mason, Sam Wallbridge and Danny Ray who all broke well-established records and, being one year older and more experienced, will be well-placed to improve even more in 2014.’ 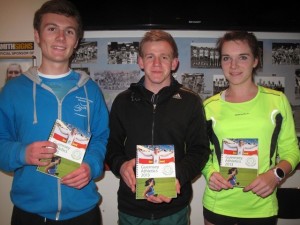 Front cover stars: Sarah Mercier and Sam Wallbridge, who appear on the front cover of the 2013 edition, show off the new book with athletics officer Josh Allaway.