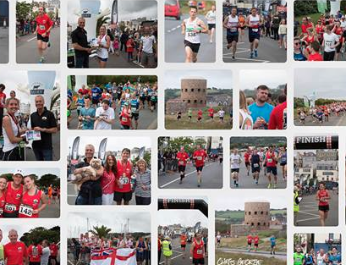 The 2016 Milk Run’s 600 entrants were met with generally favourable conditions. The temperature was relatively cool, and moderate Southwesterly winds assisted runners up to the 10-Mile mark at the expense of a tougher final 3 miles.

Wilesmith led from the start to secure a winning time of 72:14. He used the coastal tailwind to get ahead of time at the start, and was ‘inside PB pace for the first 10 miles’ before dropping off slightly into the headwind from around Bordeaux. Nevertheless, Wilesmith was ‘delighted’ with his finishing time which was well within the A Standard and probable Island Games selection for his 4th games. Dave Emery and Carl Holden were next to cross the line, while Tristan Robilliard and James De Garis pushed each other to sub 80-minute finishes and fourth and fifth positions respectively.

The women’s race was somewhat less predictable, with Laura McCarthy’s strong starting pace earning her an early lead. Past Olympian Ulrike Maisch was always expected to make an impression, and eventually caught McCarthy, putting in a strong last few miles so that ‘she would not follow’. Maisch’s finishing time of 85:24 was well within the Island Games A standard but McCarthy’s efforts were rewarded with a Development Standard.

Sean Galpin put in a noteworthy performance to earn the distinction of first veteran in 10th place overall, which was even more impressive seeing as he is technically in the ‘supervet’ 50+ category. Galpin had aimed to run inside 84-minute pace, with his extra momentum along the coast cumulating in an 83:44 finish despite the headwind in the closing stages.

High humidity provided a challenge for runners finishing around the 2-hour mark, causing a fair number of runners to drop out. Despite this, the influx of over 490 finishers, both local and visiting, made this race the highest-participation event on Guernsey’s Athletics calendar.