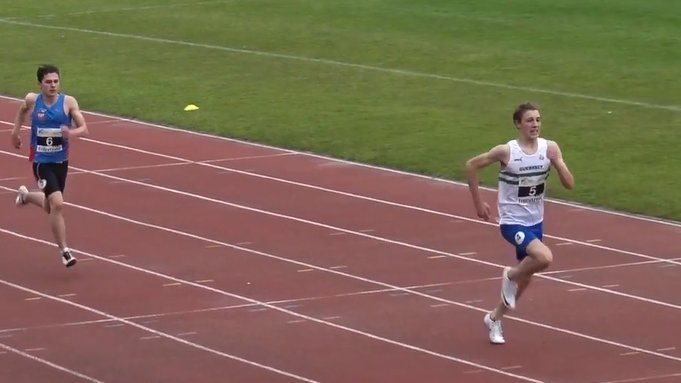 The end of official drought in Guernsey was ill-timed for those athletes looking to open their seasons at the opening meeting of the Intertrust Track & Field Challenge series.

The athletes were met with scattered patches of rain for much of the event and the sprinters were also met with strong head-winds throughout the morning. The standout performer in those sprint events was last year’s fastest woman over 200m, Hannah Lesbirel – she latched onto the fast-starting Abi Galpin around the bend before holding form down the blustery home straight to clock 25.87sec (-2.9m/s), with Galpin and Jasmine Norman also posting good season openers in the mid-26sec range.

Whilst the girls competed many times over 200m last season, it wasn’t just a season debut but an event debut for Peter Curtis over the U17 400m hurdles. The youngster had been earmarked for the English Schools Champs by his new coach Dale Garland but will have been very pleased to have ventured inside the entry standard for the event at his first attempt and in less than ideal conditions. Training partner Toby Glass went in the lane outside him over the U20 height but it was the youngster Curtis who pulled away in the home straight to clock a time of 57.96sec. His progressions in training have been evident in recent months and it could be an exciting summer ahead for him on this evidence.

There was some great depth in the women’s 100m line up and it was 400m specialist Indi Gallagher who got the strongest start and was able to maintain the advantage to the finish – her time of 12.94sec (-2.2m/s) one of encouragement given the rain into which the athletes were running. Behind her Lesbirel, Sophie Porter, Galpin, Norman and Hannah Barrett were all tightly packed in the low-to-mid-13’s.

In the field, there were solid season openers for two senior Island Games athletes as Jonny Guille leapt 6.39m in the long jump, and James Bougourd threw 55.71m in the javelin. Both will be aiming for medals in Gotland following strong showings in Jersey two years ago.

There was a pleasing number of promising juniors on display despite the poor weather conditions, with the likes of Ben Solway, Caitlin Jackson, Vicky Hancock and Macy Ozard showing well in their respective events. The meeting also attracted visiting athletes in the shape of Jersey’s Tyler Johnson and Sam Dawkins, and the Alderney residing English veteran athlete Charmaine Johnson. The Jersey sprinters took the 1-2 in both sprints, with Johnson posting 11.63 and 22.61 to take the victories.

Full results are available for download below and on Power of 10.