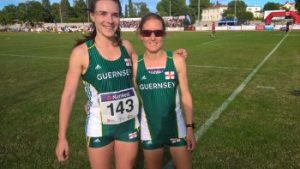 Distance duo bring back medals for Guernsey– by Jamie Ingrouille

Reigning champion Mercier ran a bold race for silver in the wake of an injury that curtailed her training in the build-up. Despite being unable to stick with Orkney’s Anna Tait who eventually took gold in a new Games record time, Mercier’s time of 16:58.93 was still within the previous record of 17:01.00.

‘It was a difficult race, I was pleased that Anna Tait went out hard at the start and I thought I would give it a chance and try to stay with her but she was too strong in the second half’ said Mercier.
‘I’m pleased to come away with a medal. It was not an ideal build-up to the race, I’d done a few training sessions in the past few weeks and I was definitely getting fitter in the lead-up but I don’t think I could have done any better today.’
‘I think the way the race was run really helped me, it was an honest race – it wasn’t too tactical.’

Perrio took bronze with a time of 17:06.12 just two days after her 10,000m victory, and hopes to take a third individual medal in Friday’s half marathon.

‘I am happy after Monday’ she said.
‘I know I am tired but the half runs differently, you do not have to run quite as fast so you have some time to get into it, so if I get my recovery right, it will be quick.’

James Bougourd threw 56.20m for fifth place in the javelin final, but had mixed feelings about his performance.

‘The event was great but the result left me wanting’ said Bougourd.
‘It was fabulous to have such solid support from the Guernsey crowd. The 56.20 is in my top five competitive throws and I am aiming for some rapid progression.’

The women’s 4x400m relay team, consisting of Indi Gallagher, Amelia Lees, Rebecca Toll and Eliza Mason, has advanced to the final after a narrow heat loss at the hands of Isle of Man.

The men’s team has advanced automatically after several teams failed to turn up for the heat.