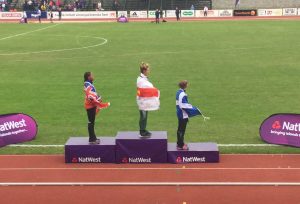 Two of Guernsey’s star sprinters brought back medals on a blustery evening in Gotland.

Hannah Lesbirel trailed the defending champion, Bermuda’s Taahira Butterfield, around the bend then powered ahead on the straight to win the women’s 200m in a wind-assisted time of 24.69 seconds.

Lesbirel was under heavy pressure after running leading times in both of her qualifying rounds.

‘I felt petrified, I really was petrified going into it. There was so much pressure on me to take the gold but I’m quite a competitive person so I think I dealt with the pressure quite well, I wanted the gold and I just had to get it. I came out with a fighting spirit’ she said.

Josh Allaway put his doubts to rest after reclaiming Jersey 2015’s 100m silver medal with a wind-assisted 10.55, which was the fastest time ever run by a Guernsey athlete (albeit also ineligible for record purposes).

‘It was incredible. In Jersey I won the silver as well but I came into the final not expecting much, and through the week I had not really been running as well as I had been expecting, but I just stepped it up at the right time and let it all out’ said Allaway.

The same strong winds that made for quick sprint times presented a challenge for our young athletes competing over the full-lap distance.

15-year old Eliza Mason put in an incredibly valiant effort to finish fourth, just outside the medal positions, in her first high-level 400m hurdles competition with a time of 67.34.

‘To be honest, it was way better than I expected. I just executed it exactly how I wanted to – I think that was all I could have asked for really’ she said.