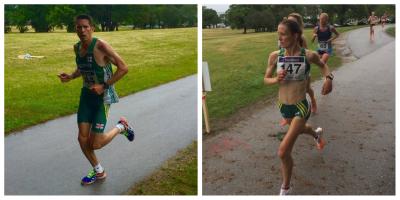 Lee Merrien redressed his 10,000m defeat while Louise Perrio added a second gold to her medal tally, both over the half marathon distance, in the fantastic finale of this year’s Island Games.

Merrien concluded his lengthy Games career by winning the men’s race in a quick time of 1:06:45.

It appeared to be a two-man race right from the start as Merrien took the lead alongside Isle of Man’s Ollie Lockley, who outkicked him to win the 10,000m last Sunday, but Merrien pulled further ahead as the race progressed and eventually won by over a minute.

The Guernsey Olympian said: ‘I’m really chuffed and really pleased (to win), not a bad way to sign off my Island Games career.’
‘In terms of the race I knew I needed to burn them off earlier so I decided to make it a true-run race from the start.’
‘When we turned into the wind along the front at about 3k, I sensed that I’d got a bit of a gap and then I just kept on stretching it out from there really.’
‘There was obviously disappointment after the 10k and I wanted to give myself every chance and I wasn’t leaving it until the last 400 metres.’

Louise Perrio won the women’s race in a time of 1:19:06, just three seconds outside her own island record.

The half marathon victory was a superb finishing touch to a brilliant week for the endurance stalwart, who also took gold over 10,000m and bronze over 5,000m.

Perrio broke from the pack at around halfway to leave only her 10,000m rival, Faroe’s Marna Egholm, in contention for the win.

Perrio said: ‘It was quite cagey at the start when we negotiated the nasty downhill section – there was quite a big group.’
‘By the time we got to the turning point onto the second lap, it was not a group, it was a line, and by the time we got to the bottom of the hill it was only me and Marna- it felt like the 10k all over again.’
‘I tried to keep the pressure on and with 800m to go she was just out the back door – I was happy to win.’

Solid runs by Jenny James, who took 10th in a personal best of 1:27:38, and Laura McCarthy, who took 13th in 1:29:41, complemented Perrio’s performance to ensure team silver.

Our men’s 4x400m relay quartet were first across the line in a time of 3:19.96 but were then unfortunately disqualified due to an impeding infringement near the start of the third leg, passing the gold to Jersey who finished four seconds behind.

However, the 4x100m team brought back a silver medal with a time of 42.22. They were in medal contention from the gun but Island Games debutant Harry Burns, 18, ran a particularly strong third leg to position the team for their eventual second place finish.

Burns said: ‘As part of a team it was a brilliant experience, I was running with some really experienced and competitive athletes. As a younger athlete it is hard to fit into the team as we have got loads of experienced runners and it felt really incredible (to take team silver).’

Rebecca Toll took seventh in a similarly tough women’s 800m field with a time of 2:26.58, while Jonny Guille was sixth in the triple jump with a solid leap of 13.52 metres.

Congratulations to all who competed this week and helped consolidate Guernsey’s position as one of the most consistently successful islands in this spectacular biennial event. In total, Guernsey brought back 16 athletics medals: 5 golds, 7 silvers and 4 bronzes.