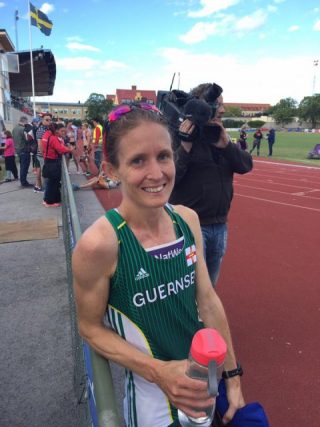 After passing the 5,000m mark in a modest 18:50, Perrio surged to the front alongside Faroe Islands’ Marna Egholm, with the duo remaining neck-and-neck right until the closing stages.

Egholm appeared to be drawing ahead on the final lap, but Perrio covered her every move and outkicked her in the final straight, in front of a rapturous crowd, to take gold in 36:26.66.

This was a solid improvement on her performance in the Jersey 2015 Island Games, where she took bronze in the event.

‘It was a bit of a relief after Jersey (2015). During championship racing we do not know what will happen until the finish and that last lap was pretty hardcore’ said Perrio.

The next step for the Alan Rowe-coached athlete is Wednesday’s 5000m.

‘The five is not the focus race but I may as well give it a crack. You have more people of a similar quality and it is also hard to know how it is going to turn out – whether it will be tactical or fast from the start – so it is hard to know what to expect from that race’ she added.

It was a Guernsey one-two in the 400m hurdles as Alastair Chalmers and Sam Wallbridge took gold (52.21) and silver (52.58) respectively after winning their heats this morning. Wallbridge was overjoyed after breaking his two-year old personal best in the process.

‘My personal best was 53.51 before this so I absolutely smashed it – it was a huge thing for me’ he said.
‘I was not expecting too much but when I came level with Ala, I realised I was on for a great time. And in tough conditions – I was really happy with it.’

Zoe Fitch was fourth in the women’s javelin final with a throw of 35.10m, an agonising 30cm short of bronze.

Indi Gallagher will compete in the women’s 400m final tomorrow after coming second in her semi-final, clocking a personal best of 57.30 in the process.

Full results can be found at http://islandgames2017results.com.