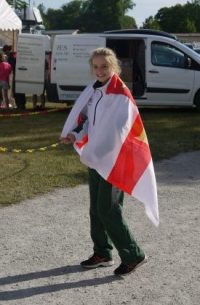 Indi Gallagher ran hard from the start to take a bronze medal as well as a senior island record in the women’s 400m, with her time of 56.48 improving Kimberley Goodall’s 12-year old record of 56.81.

‘I did not actually expect that at all. To get a bronze medal and a new senior record on top of that was just amazing, I am just absolutely stunned, I have no words basically – I’m so happy!’ said Gallagher.

In-form Gallagher will provide extra strength to the women’s 4x400m relay team, who have high hopes for the event which will begin with tomorrow’s heats.

Guernsey’s other big medal hope, Kylie Robilliard, was on for what looked like a convincing victory in the women’s 100m hurdles but an unfortunate stutter on the last barrier relegated her to fourth.

‘I would say it was the most nervous I have been since I was about 11 years old, the reason being that my preparation has been quite challenging’ she said.
‘My training has been hampered because I tore my hamstring seven weeks ago and I have not been able to do any long hurdles, long training or speed endurance.’
‘I think, ultimately, it is onwards and upwards and looking back on this will help me do better in other races.’

It’s a rare occurence for the island to have two 800m finalists but Richard Bartram took fifth with a new personal best of 1:57.15 and Murphy took sixth in a time of 1:57.27, both in a very competitive race won by young Shetland athlete Seumus Mackay in 1:53.32.