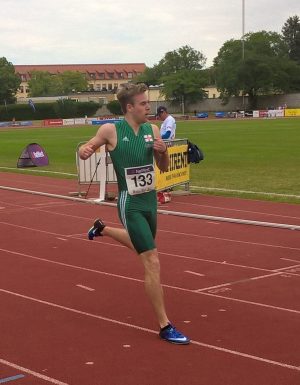 Hannah Lesbirel ran a strong semi-final to cement her position as one of Guernsey’s main medal hopes on a blustery morning in which several under-17 and under-20 athletes also impressed by advancing to tonight’s finals.

Lesbirel was again the fastest woman over 200m, clocking a wind-assisted 24.90 to drop defending champion Taahira Butterfield (25.11). Lesbirel’s time will not count as a personal best, but it bodes well for tonight’s final.

‘I do feel confident that there’s going to be a medal chance but at the same time I am not going to be disappointed if I do not medal because it is such a strong field’ she added.

18-year old Teddy Le Clerc will appear in the 400m final after clocking a personal best of 50.50 to earn a fastest loser’s place in a very competitive field.

‘It was super difficult conditions, I have not run in anything like this before. I knew I had to go out hard and I felt good off the bend, I really am psyched to run in the final and hope to do something like Cam does tactics-wise’ said Le Clerc. [Cam Chalmers is known for strong finishes].

15-year old Eliza Mason ran a strong heat in her first ever major 400m hurdles competition to clock a time of 1:09.03 and make it into the final as one of the fastest losers.

Established senior athlete Josh Allaway took third in his 100m semifinal with a time of 11.15 seconds. He will appear in the final alongside some very high-caliber athletes, most notably Cayman’s Kemar Hyman who won his heat in an astonishing 10.17.

All of these athletes will now shift their attention to the finals which take place tonight from 17:00 onward.