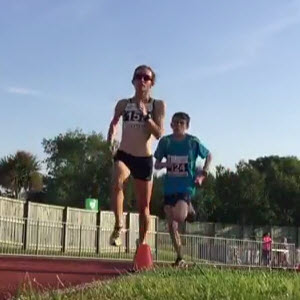 Perrio & juniors sizzle in the heat over 1500

In a desperately close finish, u13 girl endurance duo of Kate Bain and Summer Woodhead both ducked inside the 5min barrier for the first time with Bain just edging Woodhead after being several metres in arrears coming into the home straight.  Their times will take them into the UK top 10 ranking for u13 girls. Eliza Mason (u17w) also went under 5mins for the first time.

At the head of the race pacemaker Dan Galpin laid on a requested moderate pace over the first 800mtrs to set up a racing scenario often encountered in championship races for Gotland representatives Ed Mason & Richard Bartram.   Challenger Joe Yeaman attacked the duo in the last lap but was not able to make an impression and Mason and Bartram pulled clear with Mason taking the win.  Yeaman was rewarded by 12 second PB.