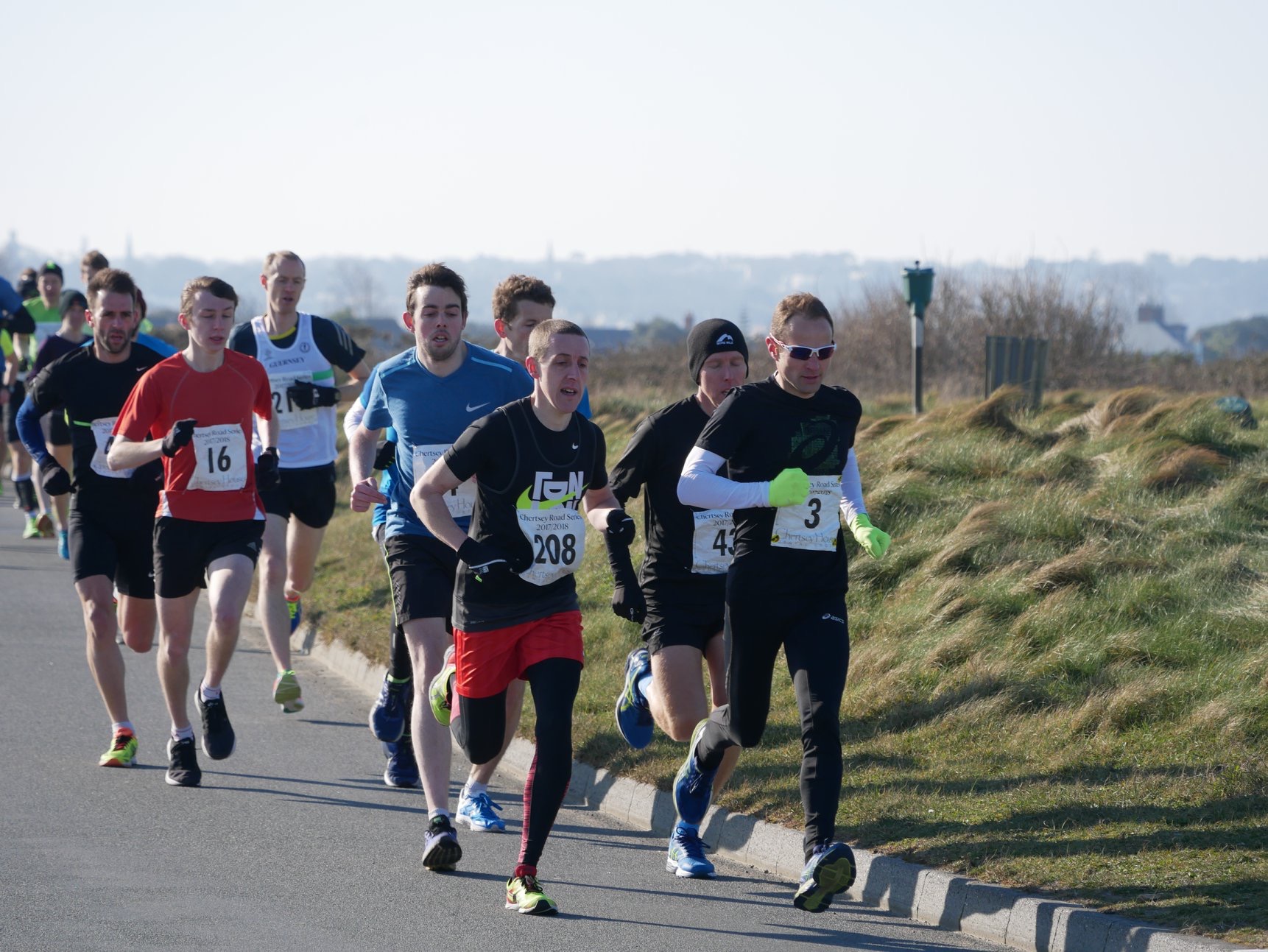 Burling and Perrio defy conditions with course records. (image: Phil Nicolle – soon after the start and with Ryan Burling already out of shot a large group forms in his wake).

In what has quickly become a regular occurrence, Ryan Burling ran another course record to continue his sequence of wins in the Chertsey series and clock 31 minutes 59 seconds for the Pembroke to North Beach route.

Louise Perrio, who like Burling is in heavy training for upcoming major events, treated the event as a split pace run but still set a new women’s course record of 36:37.

After a quick opening mile, the runners were met by strong easterly headwinds in the second mile and, though Burling had already opened up a substantial lead, he was slowed considerably. “I lost 40 seconds in that second mile,” he explained post race.  The wind was more a help than a hindrance over the second half of the race, he was soon back to five-minute mile pace and became he first runner to dip below 32 minutes for the course. Indeed, after he crossed the Petanque area finish line at North beach, it was another minute before the second placed runner could be seen at Salerie Corner.

After a strong sequence of domestic outings, the former Luton athlete now targets a string of major off-island races with the London Half Marathon in early March. He will then represent Guernsey FNB Endurance teams in the Eastleigh 10k and the Home Countries Cross Country International in Nottingham.

Like the race winner, Steve Dawes is in a heavy period of training and sat in with a large chasing group before edging ahead at halfway and finishing clear of Carl Holden and Pete Amy.

Perrio, who currently leads the UK 5km rankings courtesy of her race win in last weekend’s Serpentine 5k,  was always well clear in the women’s competition and ran the event at a split pace finishing with a strong second half. Hockey regular Liz Dudin showed the benefits of her more regular running training with Lee Merrien’s Wednesday night group for a solid second in 40:38 whilst another improving runner, Emily Bookless was a good third in 41:31.

Age & Gender graded results:- In a near hundred-strong field, septuagenarian Julie Lawlor  ran superbly for 73rd overall and yet again she topped the Age&Gender grading table.    With 80% generally regarded as being “good for age” nationally the septuagenarian scored a remarkable 91.58% and  currently sits in fourth  place in the national listings for her age group.

There was little between Burling and Perrio who scored 83.53% and 83.43% respectively. Sean Galpin, in the Vet 50 category continues to return to form and claimed 4th with 79.49% whilst Simon Ingrouille, who has a couple of years to go before clicking into the same age group as Galpin, was just outside his personal best for the distance placed fifth with 79.05%.