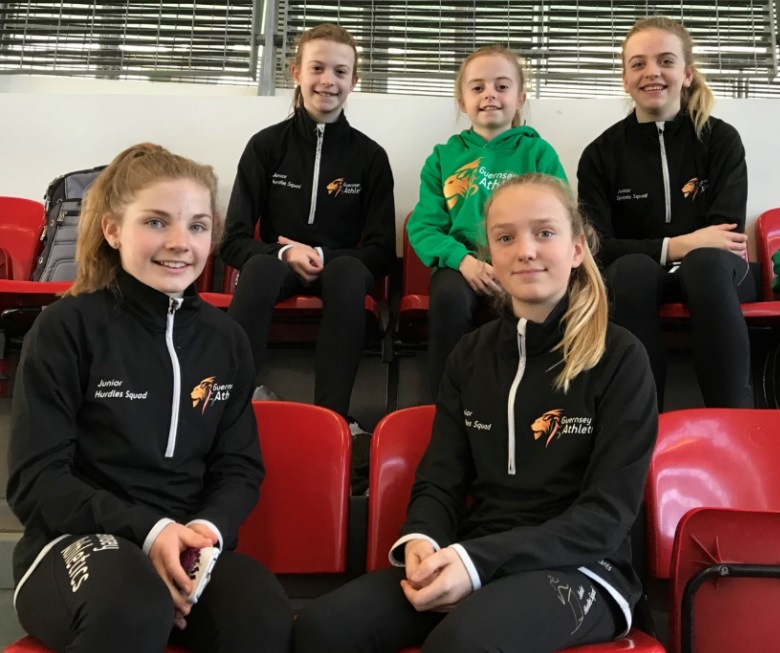 A day and a half after being awarded the U13 Most Improved Athlete of 2017 at the Guernsey Athletics Annual Awards evening, Macy Ozard (bottom, left) produced outstanding performances over both 60m and 60m hurdles at Lee Valley Indoor Athletics Centre.

Now top of the two-year age group, she claimed the Island U13 60m record in her first race with 8.72sec before going 0.02sec quicker in the second round. Not only was it an Island record but it puts her only 0.1sec away from the entry requirement for next year’s U15 national championships. In her preferred discipline of hurdles, she produced two excellent times in the two rounds of competition. 10.19sec in the first round and a rapid 10.06sec in her second run – ranking her 7th in the UK. The island U13 record stands at 9.97sec to Rhiannon Dowinton and both girls’ coach Nick Marley is hopeful that his younger charge can beat the mark in her final indoor event of the winter in a couple of weekend’s time.

Also over the 60m hurdles, but at the U15 specification, Vicky Hancock (bottom, right) secured a national entry standard for next season with 10.38sec and also secured a PB in the 200m. Megan Lilley (top, left) displayed astonishing progression from the summer in both the 60m hurdles and flat, clocking 10.54sec in the former and 8.95 in the latter.

Eve Walley (top, right) was the only athlete of the travelling party to compete over a distance farther than 200m as she took on the 300m distance which is now established as an U15 discipline. In her first ever competition over the distance she clocked an impressive indoor mark of 46.25sec – following this up with another strong long sprint with 28.55sec for the indoor one-lap event the 200m.

The youngest athlete on the trip, Aimee Lilley (top, centre), achieved PB’s in all three events she tackled – the 60m, 200m and long jump.