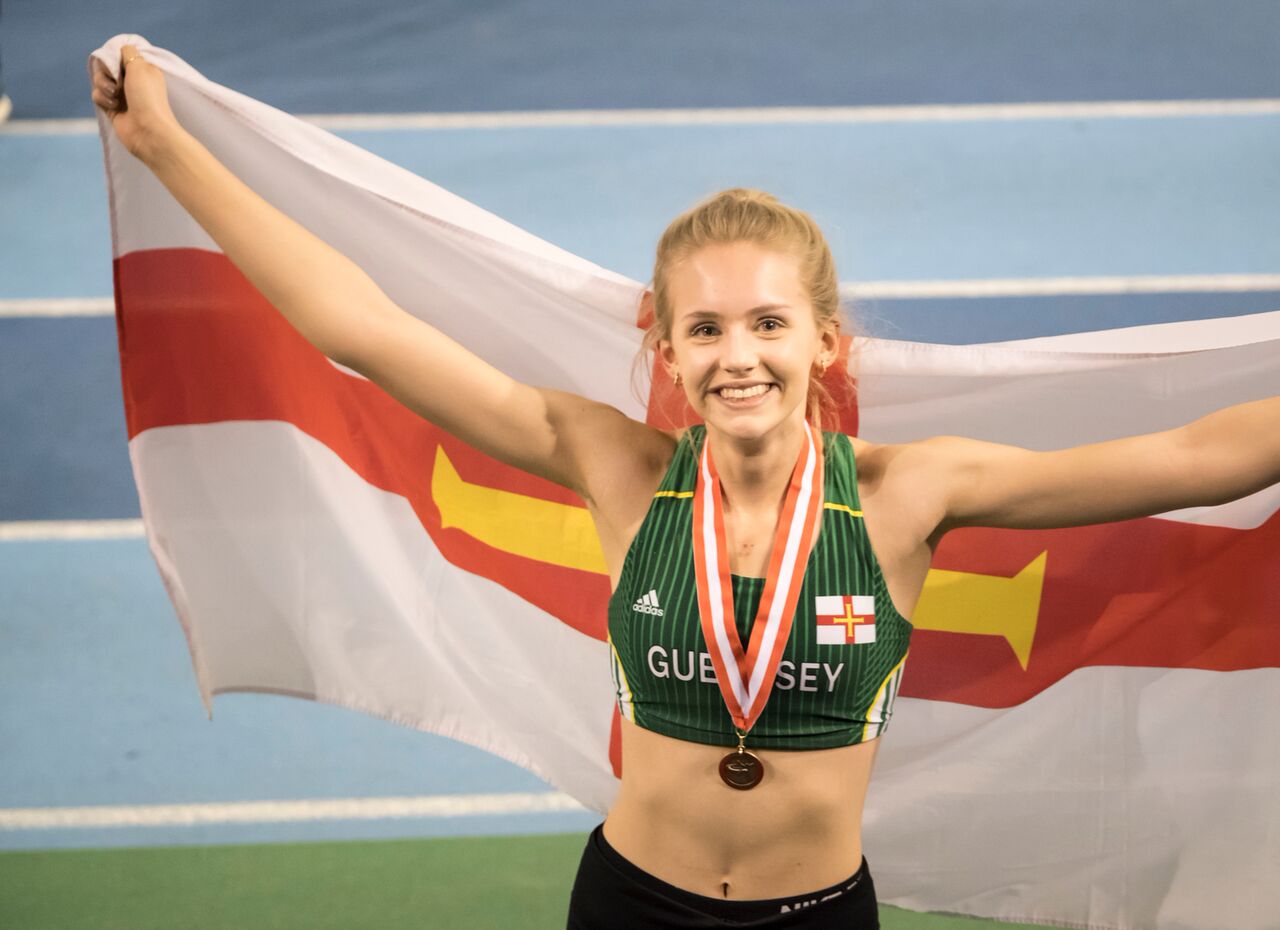 No hurdles – no problem. Porter & Chalmers claim bronze on the flat

Sophie Porter produced the pick of the Guernsey performances at the England National Age Group Indoor Championships at the EIS in Sheffield over the weekend. She claimed the senior island 400m record by 0.02sec in winning national bronze in the indoor two lap event. She clocked an outstanding 56.32sec in the final to surpass Indi Gallagher’s PB performance at last year’s Commonwealth Youth Games.

It was the second year in a row that the hurdles specialist had produced a big performance at this championships – she took the U17 300m title this time last year with an island-record-breaking performance of 39.99.

Fellow 400m hurdler Alastair Chalmers saw a big improvement from his performance at last week’s senior British Championships as he went under 49sec for the first time with a new best of 48.70sec. Like his training partner, he also took home a bronze from the event. It now means that he is the fourth fastest of all time behind his brother Cameron, Tom Druce and his coach Dale Garland – though he has a couple of seconds to find if he wants to make inroads into the top three. Chalmers will now focus on preparations for 400m hurdles at the Commonwealth Games, buoyed by his evident improvement over the flat event.

Chalmers was joined in the 400m heats by Peter Curtis who was hampered by an unfortunate lane assignment in his 400m in Sheffield last month which meant he went into this weekend with a less favourable seeding and thus another difficult lane draw. He attacked the race from lane 2 but was unable to hold on and came home in 51.28.

Joe Chadwick had looked a good bet for a medal going into the championships but a severe bout of flu in the last fortnight evidently hampered the 16 year old who ultimately bowed out at the semi-final stage having stumbled out of his lane around the final bend, having clocked 22.87 in his heat for second place. He ends the indoor season ranked 1st nationally as the winning time in Sunday’s final did not better his 22.41 achieved in Glasgow last month.

Amelia Lees’ was, like Curtis, hampered by an unfortunate random lane assignment in her 300m in her previous indoor race in Glasgow which meant she received another difficult lane draw. She executed a good race to lower her outright PB to 41.74 but did not progress to the final. She also contested the 200m heats where she clocked 26.38, a little way off her very best having gone sub-26 last summer.

The youngest athlete on the team was U15 Amelia Hart. She achieved the national entry standard in Glasgow last month but had suffered a hamstring problem less than a fortnight ago. Although she fell short of her PB of 8.59 on this occasion, she did not suffer any ill-effects from the injury and will take the valuable experience of a national event forwards to the summer.