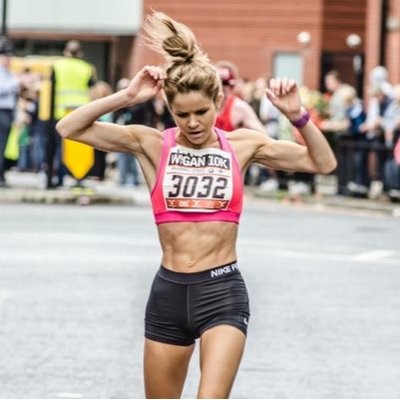 Exeter based athlete Eleanor Davis (pictured) has been added to the line up for both road races over the Easter weekend. The 29 year old boasts an outstanding 33:56 personal best over 10k which she achieved in finishing second at the 2016 Cardiff 10k event. She has already been inside 35mins twice this calendar year including victory in Chester earlier this month.

Arguably Davis’ most impressive recent showing came at the Brighton Half Marathon as she comfortably saw off the field to win in 74:26 (the course was ultimately confirmed as 146m short – however the time is still mighty impressive). She has enjoyed some international success on the roads in the past few years with podium finishes in races in Slovenia, Denmark, Norway and Lanzarote.

Guernsey’s distance star Louise Perrio very much dominated the female side of last year’s Intertrust Easter Running Festival. She recorded one of her fastest ever 10k times at last year’s event with 35:14, so Davis promises to provide a stern test in her quest to repeat the victory in 2018.

Coincidentally, the two women in fact share identical personal bests in the 5k of 16:48. Not only that but it was actually in last year’s Intertrust Easter Running Festival that Perrio achieved her best mark, so it should be a fascinating battle on Good Friday this time around. Davis’ last 5k was her personal best performance back in April 2016 as she has largely raced over longer distances since then. She is now coached by previous visitor to the festival and former GB international Helen Clitheroe.

Intertrust Easter Running Festival comprises four running events in four days over the Easter weekend. Guernsey Athletics welcome athletes of ALL abilities to take part in any number of these races. Kids races are also available. For more information and to enter (final online entry is this Sunday 25th March but on-the-day entry will be available) click here