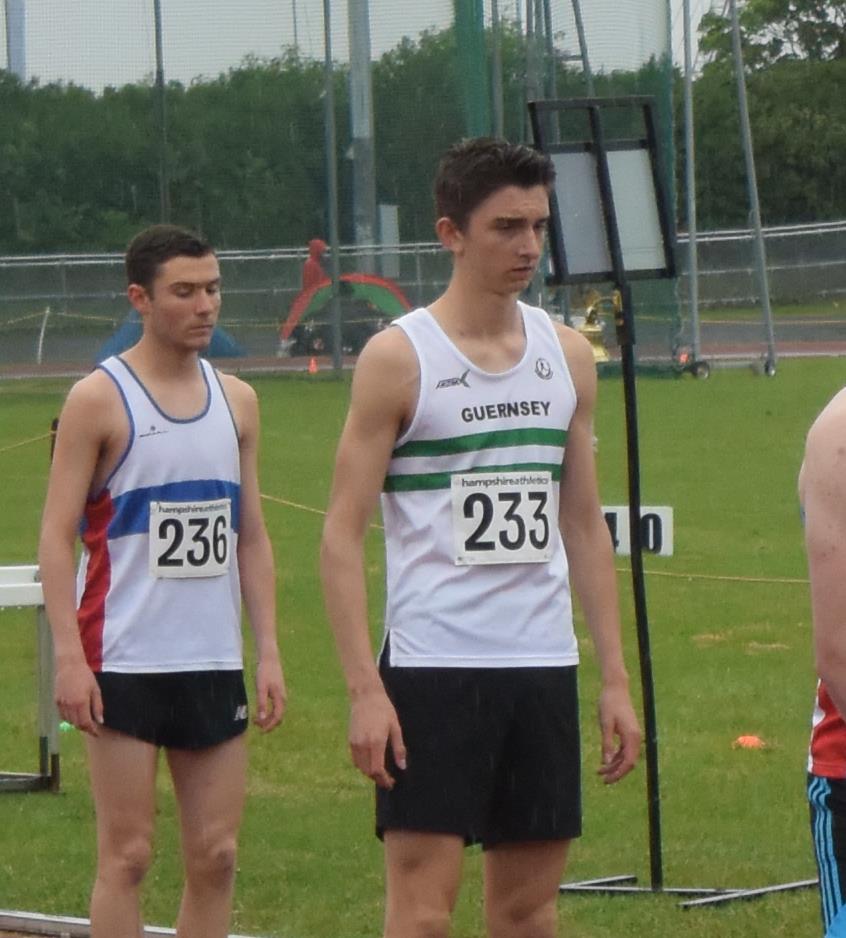 County medals across the board for Guernsey athletes

There were medal winning performances from Guernsey athletes right across the board over the Hampshire Track & Field Championships weekend. Though this only tells part of the story due to the varying depth in certain events and age groups, medals were claimed in events ranging from senior men’s field events through to U13 girls endurance…and plenty in between.

Someone who is cruelly denied an Island Games debut until 2021 is Guernsey new-comer Sia Banbury. The hammer will not feature in Gibraltar but the 16 year old is certainly bringing the event to life on Sarnian shores. In just her third competition throwing the senior (and U20) implement, she launched the hammer out to a new PB of 42.69m. As well as surpassing her own personal record, it also surpasses Emma King’s senior/U20 island record which has stood for the best part of 18 years. Banbury will also have an eye on the English Schools qualifying mark of 43m which is now within reach…and longer term the home 2021 Games where a medal is certainly a strong possibility.

Various Gibraltar Island Games hopefuls were on display and it was arguably Alex Rowe (above) and Jasmine Norman who turned out the highest quality displays. Rowe cracked the 2-minute barrier for 800m last summer and shattered his personal best in taking the U20 silver medal on Saturday with 1:56.09sec to move up to 11th on the Guernsey all-time list and put himself in a prime position to secure an Island Games debut in 2019. Norman completed a double-silver in the sprints with a new PB of 25.64sec (Guernsey 7th all-time) in the 200m following her 12.55 over 100m on Saturday. She will hope to also continue to strengthen her case to contest her second Island Games 200m-campaign throughout the season.

Both Rowe and Norman’s training partners enjoyed success at U17 level in the form of Chris Bain and Joe Chadwick in the 1500m steeplechase and sprints respectively. The latter had to deal with the cold and damp conditions that the late Saturday afternoon produced for the final of his favoured event, the 200m. He convincingly won the silver medal in 22.55sec – just outside his PB achieved indoors in winning the Scottish title…but the 100m did yield a PB for the 16 year old. The Guernsey all-time list is awash with historic hand-timed 11.0sec clockings but Chadwick showed potential to overhaul those in the coming months as he surged to 11.08sec to lose out on the title by four-hundredths of a second. In the ‘chase – Bain followed up his debut over the event by executing a near-perfect race strategy to claim a sizeable PB of 4:40.37 and win the Hampshire title. It topped an already pleasing weekend for the youngster who had taken fourth place in the 800m final the previous day with a PB of 2:02.40 just under a second ahead of his training partner Isaac Powers’ PB performance in fifth.

The other outstanding displays at U17 level came from Rhiannon Dowinton. She has long been focused on the sprint hurdles along with numerous competitions in the field events – but it was arguably the 300m hurdles that caught the eye the most on Sunday morning. Literally straight from her 4.89m long jump (5th place), she took on the long hurdles discipline for the first time in a UK competition. Not only did the 15 year old claim a bronze medal but she clocked a mighty impressive 2sec PB of 45.66sec – comfortably an English Schools and National qualifying time. She’d earlier matched this feat over the sprint hurdles but was unfortunately denied an electronic time due to a timing malfunction – she was given a hand timed 11.9 for another silver medal with training partner Sofia Mella also performing well with a 12.5. Mella was slightly down on her best in the triple jump – an event she hopes to compete in at the Island Games next year – but was still able to take home a bronze medal whilst Amelia Lees went sub-42 in the 300m but was disappointed to only take home silver.

There had also been frustration on Saturday for 400m hurdler Peter Curtis who fell well short of his best over the barriers…but he bounced back in some style to win silver in the U20 400m flat after a sizable PB in the heats of 50.24…he also went sub-51 in the final to demonstrate he has all the potential to progress towards sub-50 this summer and secure an Island Games berth in the 400m, 400m hurdles and/or relay. There were other pleasing performances at U20 level as Abi Galpin, Lucas Rive, Tom Brierley, Rebecca Le Tissier and Amy Dallamore all claimed bronze medals in women’s 100m, men’s 100m, discus, javelin and 800m respectively, with Galpin and Rive both achieving PB’s.

Senior field eventers Dale Garland and James Bougourd were not at their absolute best but still came away with medals in the long jump and throws respectively. Bougourd and Rive were denied the chance to add to their medal haul as the high jump was cancelled for health and safety reasons.

At U15 level, Kate Bain was over the moon to claim a bronze medal in the 1500m final ahead of Summer Woodhead who also ran superbly for fifth spot. Bain also went on to finish fourth in the 800m on Sunday in her fourth race of the weekend. Vicky Hancock was busy in numerous events and was rewarded with a silver medal in the triple jump with 9.17m. Like Woodhead, Eve Walley finished a positive fifth in her event the 300m…she achieved a PB of 45.20 in the final. For the boys it was Alex Falla who came closest to the podium as he finished fourth in the 300m but was delighted to achieve a PB.

For the U13 girls it was Aideen Le Prevost who came away with a gold medal in the shot putt. Her mark of 7.22m comfortably saw off the field. Le Prevost was in action in various other events including the 100m where she was up against training partner Macy Ozard and Tilly Beddow. Both Ozard and Beddow achieved PB’s in the 100m (13.97 & 14.03 respectively) but went on to claim medals elsewhere. The latter is often most at home in the middle-distance events and she took a comfortable silver medal in the 800m final in 2:30.36 whilst Ozard went home with two bronze medals courtesy for the 200m and 70m hurdles. For the boys it was Jack Riley who was achieved the highest placing as he came home an extremely credible fourth in the 800m final with a new PB of 2:25.81.

Team manager Tom Druce was delighted to see encouraging performances from all corners of the travelling party and was at pains to point out that the experience can be truly valuable to those who were not necessarily to the fore at this stage. “The sports development field is constantly researching youth development because it is a fascinating aspect of sport and we all have to understand that everyone matures, grows and improves at different rates. The main thing for the athletes at an event like Hampshire is to do your best and be engaged in the process so they can learn lessons going forwards.

“I’ve joked on Facebook that when I was an U17 I ran just 12.42 for the 100m at Hampshire – which one of my U17 girls beat last year –  and a few years later I ran 10.66 as a senior. It isn’t all about being the best in your teens, though of course some success helps with the engagement! The best advice for any of our youngsters is to enjoy it and to ask questions of and listen to your coaches.