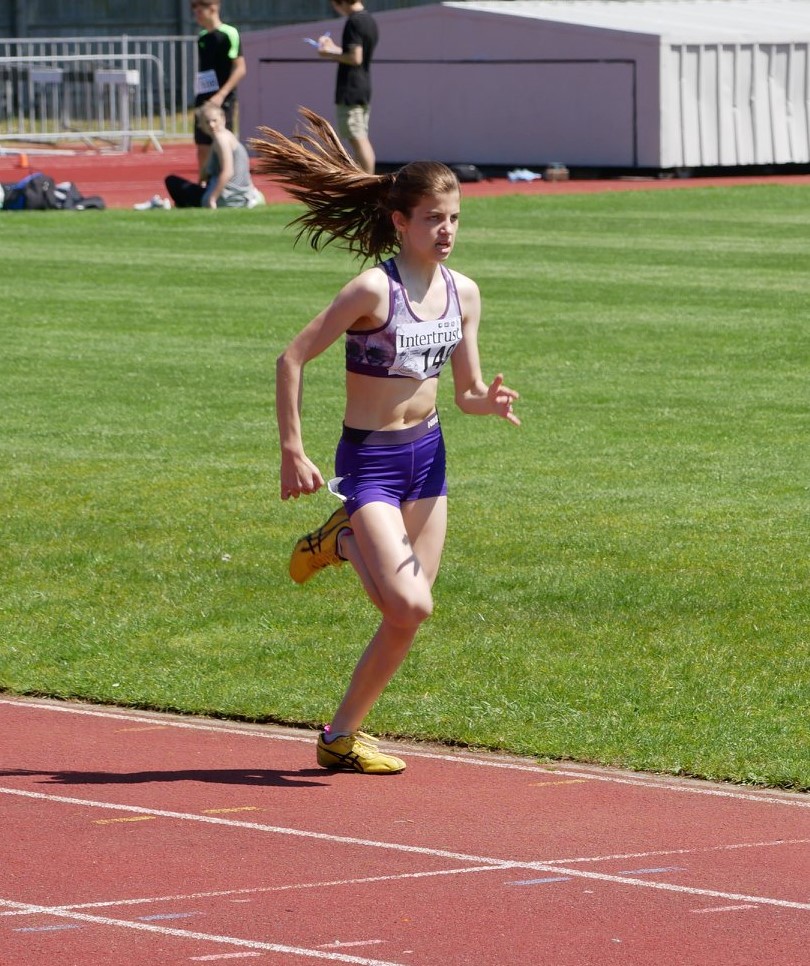 It was a great day for female athletes across all event groups and ages at a sunny but blustery Footes Lane on Sunday morning. The second Intertrust Track & Field Challenge saw U17 triple jumper Alice Hunt arguably produce the best performance of a morning of athletics which kicked off with a solid 5,000m performance by Louise Perrio and closed out with Kate Bain’s (above) sizeable PB over 800m.

Jumps specialist Hunt took some time out of the sport following a breakthrough to national level as an U15 athlete two summer’s ago, and has recently been away from the track to concentrate on her GCSE’s. However, the rest seems to have certainly benefited the Beaucamps student as she leapt out to a personal best of 10.57m. Having suffered a slight injury at the Intertrust Field Fest earlier this month, she will now hope to tackle the long jump and high jump with similar success. Behind her on this occasion was Sofia Mella who wasn’t far adrift with 10.32m, albeit with wind assistance over the legal limit.

U20 women Indi Gallagher and Abi Galpin led the way in a strongly head-winded 200m race which saw all of the field produce hugely respectable times given the conditions. Gallagher predictably took the victory as she continues to regain race fitness following a difficult winter, whilst Galpin emerged from behind Jasmine Norman and Amelia Lees to take second spot just 0.01sec outside of her year-old PB, with 25.81sec. Gallagher clocked 25.41sec for her victory.

Fellow U20 athlete Rebecca Le Tissier earned a new PB in the javelin with 30.80m as she continues her progress after a quiet year last year. But the outstanding throw of the competition went to U15 Caitlin Jackson who went over 30m with the 500g javelin for the first time. Jackson earned a top-10 UK ranking as an U13 last year and her throw of 30.08m demonstrates her continued progression in the older age group.

Her U15 counterpart Bain has been in great early season form and took a bronze medal in Hampshire over 1500m – but it is the 800m which she enjoys the most and she seemed to embrace the challenge of being part of a male field of athletes. Chasing hard in the final 200m, she was unable to quite hold on to the field but nonetheless was rewarded with a new PB of 2:23.62 and a huge confidence booster heading into the local ‘schools athletics’ season of June. Beyond that she has aspirations to compete well at regional level in August.

There were strong performances from some of the male athletes too as Alex Rowe opened proceedings with a PB in the 3,000m. In the men’s 200m Josh Allaway and Joe Chadwick both beat the 23sec barrier despite the -3.4m/s headwind and Peter Curtis and Lucas Rive both performed strongly too. Joe Yeaman took victory in the 800m where the wind doubtless made it a difficult job for the athletes, however there were pleasing PB performances further down the field from the likes of youngsters Harry Tough and Gian-Luca Robilliard. In the field, Josh Avery showed good versatility by throwing solidly in the javelin and leaping a strong 10.70m in the triple jump.

The U13 Quadrathlon results have now been converted into points by Nick Marley and are available for download below. Aideen Le Prevost recorded the highest points total of the day as she posted PB’s in all four events to pip previous victor Tilly Beddow. Jack Riley took his second victory on the boys’ side as his strong 800m ability was supplemented with solid showings across the other three events.

Full results can be downloaded below, and Power of 10 results are available here. Any athletes who have not linked to their profiles should register an account with Power of 10 (or ask their parents to do so) and then identify themselves using the “envelope” icon alongside their performance.