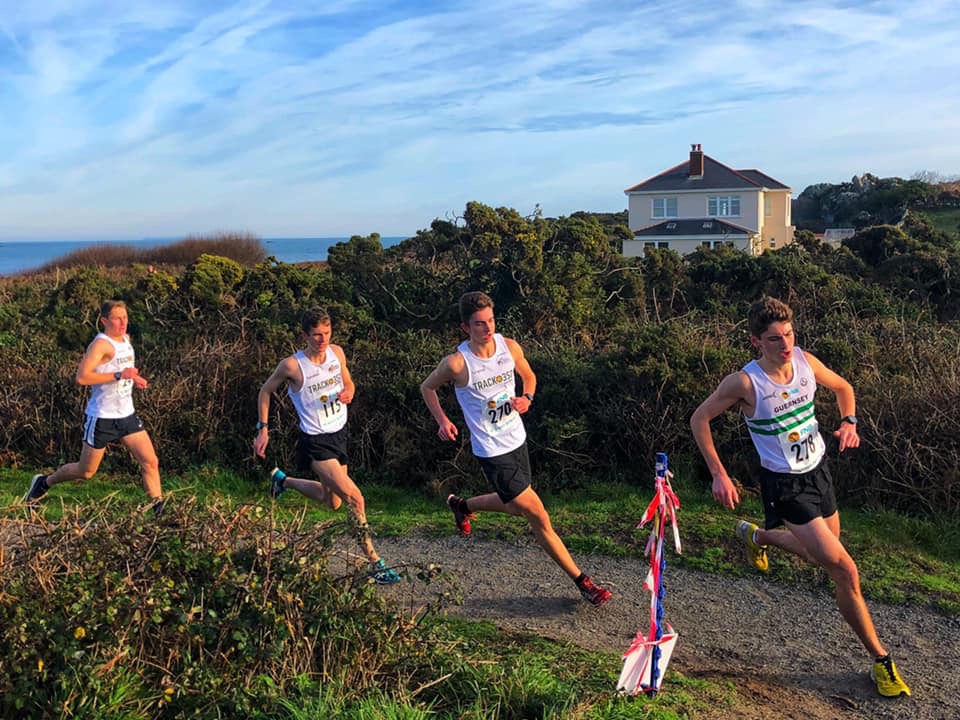 The Bath University boys produced an impressive 1-2 in this year’s Boxing Day Cross Country – although in a field of record numbers, the next podium place went to none other than in-form Sarah Mercier.

Richard Bartram sped home towards the Rocque Balan finish line to take top honours from younger counterpart Alex Rowe, with the former clocking 27:03 and the latter 27:12 over the slightly revised 4.8 mile course.

The eventual winner had earlier found company in a thick lead pack and many of the faces at the front of the field came from Guernsey Athletics’ rising youth ranks.

He passed the halfway point alongside an intriguing challenger in Sam Lesley, who has improved dramatically over the longer distances of late, while his fellow Bath students Rowe and Dan Galpin also featured in the mid-race tussle for positions.

– The image shows the early lead group of Bartram, Rowe, Lesley and Galpin.

The tactically astute Bartram said afterwards: ‘The race started quite slow for the first few kilometres, which suited me and allowed me to ease into it.

‘Sam pushed us on after that and used that to push on for the rest of the race. I’m happy with the time, it’s around my summer PB, so hopefully promising for the season to come.’

RAF veteran Chris Carre eventually came through to take third man among the seven runners beating the 28min mark – a good haul given a slight extension of the course around the Fontenelle shingle bank.

However, top lady Sarah Mercier stole the limelight with a storming run for third overall.

She was never far from the front and her 27:20 put her well clear of women’s runner-up Jenny James, who nevertheless ran well to just about break the coveted 30min barrier, and Louise Perrio in third, just over a minute back on James.

Perrio has clung onto her women’s course record and still has around 30sec of leeway but Mercier, having inched down her course PB despite the slight extension, is in good stead for the future.

A record attendance of 154 adult finishers made for a great conclusion to the 2018 racing calendar.

2019’s fixtures begin with the New Year’s Day Handicap, with action set to take off at 11:00am from the same start point at Rocque Balan.

Also on the horizon, Guernsey Athletics Club will send strong teams over to Fairthorne Manor in Botley for the Hampshire Cross-Country Championships on 5 January.

Thanks again to the numerous officials, marshals and course markers who helped in the staging of this event.