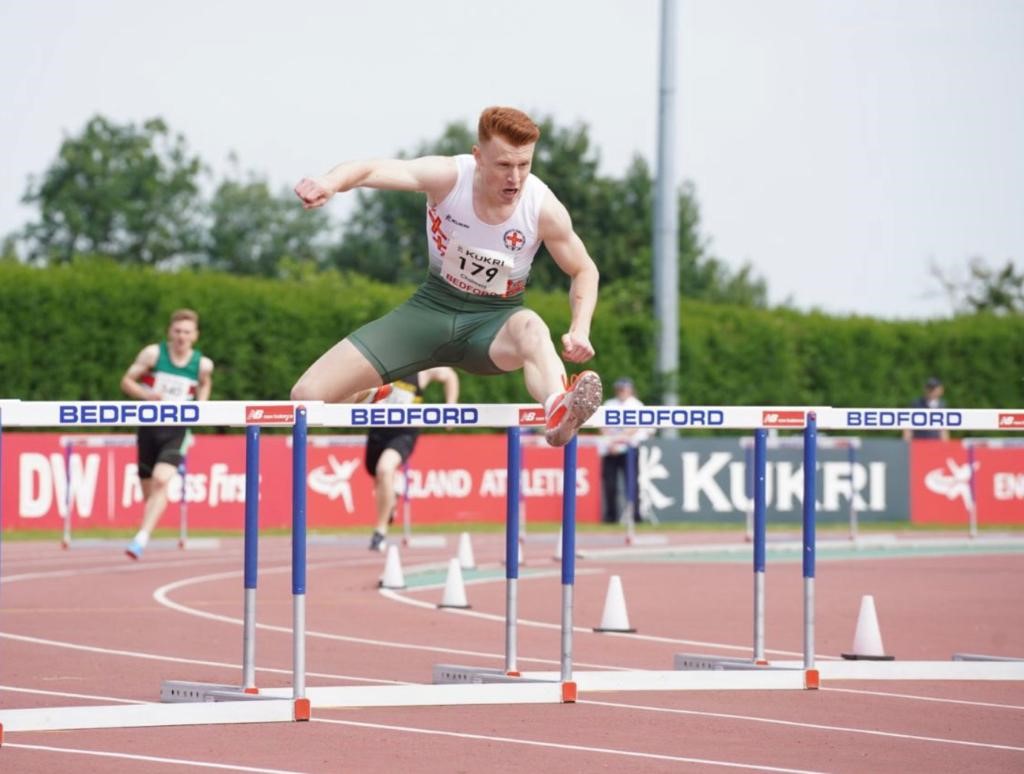 Chalmers book flights to Sweden with victories in Bedford

Alastair Chalmers was up first on Sunday morning at the England Athletics U23/U20 Championships in Bedford. The event incorporates the Trial for both the European age group championships to be held next month.

The 400m hurdler was a red-hot favourite and lived up to this billing – coming up just short of his outstanding recent performances but securing a very comfortable win in 50.58sec.

Cameron was also expected to take victory, he went in the U23 400m final aware that he couldn’t make any mistakes with the likes of Lee Thompson breathing down his neck. As the experienced campaigner has always maintained, he is focused on positions and titles more so than times. This focus paid off as he held off the charging Thompson and Alex Haydock-Wilson in the home straight in 46.33sec.

The remaining quarter milers in Guernsey colours were U23 hurdler Sam Wallbridge and U20 Peter Curtis on the flat. The former ended up contesting a straight final on Saturday morning. He looked to have put himself in a strong position but could not maintain it in the home straight and finished 6th in 54.15sec, just 0.01sec off his SB. Peter Curtis similarly looked in a great position at 300m but wasn’t quite able to maintain his speed in the home straight, clocking 50.85. Both men will benefit from their races as they go forwards to the Island Games.

If the conditions were suited for the one-lappers, the sprinters were enjoying them significantly less so. Island Games 200m selections Joe Chadwick and Abi Galpin both produced encouraging performances despite headwinds, and Indi Gallagher returned to the track for the first time since January following injury. Chadwick limited himself to just his favoured 200m event following a huge PB last weekend – he clocked his second sub-22sec run with 21.92 to make the U20 semi-final. The 17-year old did not consider the race a faultless run by any means and is expecting better by Gibraltar. Also maintaining her upward curve was Galpin who doubled up here despite focusing on the 200m for the Games. It was her 100m that was arguably the most impressive as she clocked 12.56sec for third place in her heat on a day when numerous athletes were several tenths of a second down on their respective PB’s – her 2018 PB standing at 12.50. She backed that up in the semi with 12.64 and then posted her fastest head-winded 200m to date with a 25.60 clocking. Gallagher posted times of 12.95 and 25.98 in the respective events which bodes well for her upcoming comeback over her favoured 400m.

In the field, Sia Banbury represented Guernsey at national level for the first time and was 14th in the U20 hammer with 43.55m. Impressively, she achieved this under pressure on her third and final throw following two fouls. The hammer will not be contested in Gibraltar, but Banbury can now look ahead to the prestigious English Schools Championships which take place on the final Friday and Saturday of the Gibraltar schedule.

Over the high hurdles, Toby Glass clocked 16.55sec in his first 110mH at this level. The headwind could have proved particularly problematic given the technical nature and the fact he is still learning the event, so Glass was satisfied to execute the race well given the conditions.

The only slight worry for the Guernsey contingent was Ed Mason’s forced non-finish in the steeplechase. The experienced Island Games silver medallist had a niggle in warm up and was not comfortable during the race. He will look to settle this in the next fortnight ahead of heading out to Gibraltar.