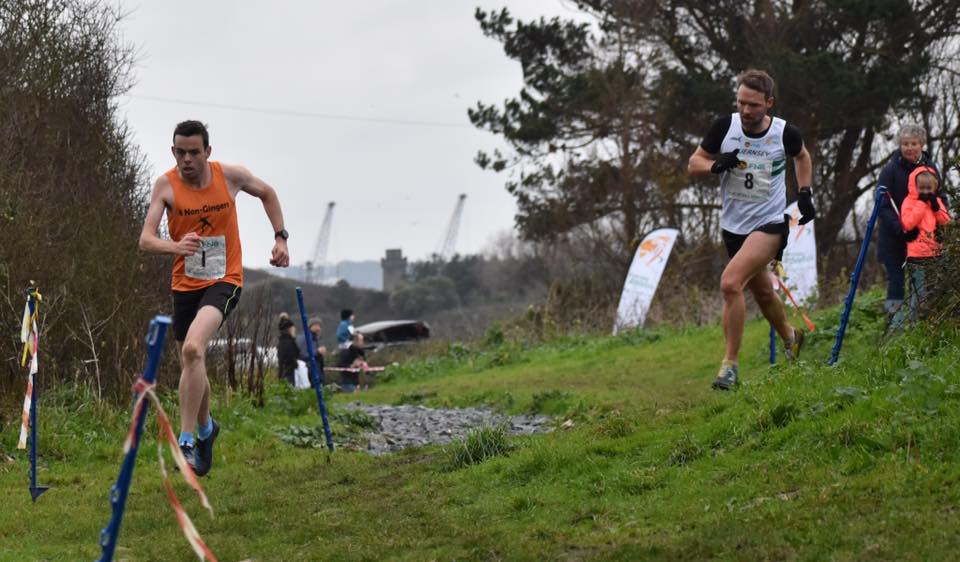 The twists, turns and surface of the new Bordeaux course proved a popular choice for the third race in this season’s FNB Cross Country League and arguably produced the best race of the series to date as Richard Friedrich was dealt a scare by James Priest who led deep into the the final lap of the 6 lap, 6 mile course. (Image Rob Elliot)

After leading the large field of 126 runners on the opening laps it was the former Munich Marathon winner who took the initiative but Priest, the reigning series champion, moved clear on the 5th circuit and went into the final lap with a 30 metre lead. Friedrich raised his game and surged past him on the upper drier technical section and came home with a 50 metre win.

Although Friedrich leads the series he will not be crowned yet as with premium points available in January’s final event Priest can still theoretically catch him.

After a brief period away from racing Sarah Mercier returned to win the women’s 4 mile race from Jenny James but in the overall division two race Mercier was second and a minute behind 16-year-old winner Chris Bain whilst 15-year-old Henry Lister ran a superb race to split the island’s gold and silver medallists from Gibraltars 2019 Island Games.

Behind James, Louise Perrio was a distant third but there there was a great battle just behind her with Nix Petit continuing her return to running form and holding off Amy Critchlow, Emma Beardsell, and Emily Squire.

Thierry Le Cheminant and Summer Woodhead headed the 3 lap, 3 mile race but after a close race it was budding triathlete Le Cheminant who prevailed.

Thomas Merrien was the winner of a very competitive 2 lap U13 race from Charlie Hynes. Darcey Hodgson was the leading girl.

A big thanks to all volunteers and helpers who ensured the event ran smoothly.

Entry information for the Club Cross Country Champs will be available soon. The event will be open to non-club members but all athletes are asked to maintain their FNB numbers for entry to races up to and including the final FNB series fixture in January.