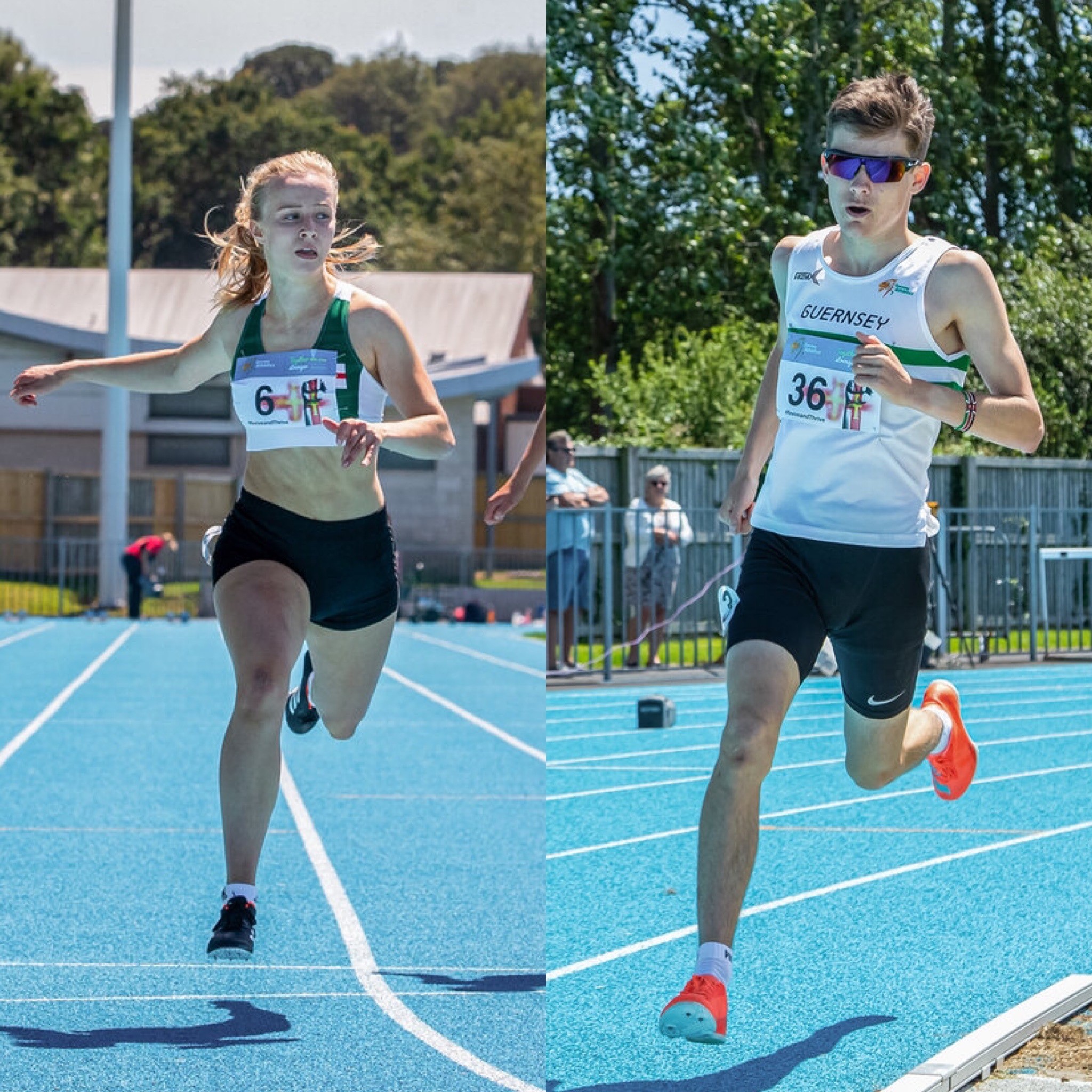 Main pretenders live up to expectations

Chris Bain and Abi Galpin were touted to provide the highlights of Guernsey’s first ‘fully normal’ track and field meet of the summer and both duly obliged. The meet was of course also significant nationally as the first full track event to take place in the British Isles, following the socially distanced curtain raiser two weeks ago.

Galpin showed her credentials last time out as she went top of the British rankings for 100m with 12.34sec…and also went quicker later that day with a slightly wind-assisted 12.24. This time going over double the distance, she again saw the wind creep over the 2.0m/s limit – but this did not mask the obvious quality that the 19-year-old has developed over the past 12 months. The 2.6m/s following wind means that Hannah Lesbirel’s 3-year-old Island Record lives to fight another day, after Galpin went 0.38sec inside the mark with an outstanding 24.57. It also surpasses Lesbirel’s fastest time in any conditions – 24.69 – which she clocked when taking gold at the Island Games in 2017. All-time =3rd fastest Sarnian Indi Gallagher posted a solid early-season 25.43 ahead of Amelia Lees’ 26.10. There were also encouraging runs from U15 and U17 athletes including a number of girls posting 27sec times for the first time.

U17 Island Record-holder Bain led out a stacked local 800m field which included both of Guernsey’s Island Games representatives from 2019 – Gibraltar 4th placer Alex Rowe and Joe Yeaman. Bain predictably stayed closest to the pacemaker throughout the first lap and passed the halfway point in sub-56sec. He took on the race alone from 550m and although he slowed in the finishing straight held on to clock a PB of 1:54.45. Closing a little in the closing stages, Rowe held off Yeaman 1:55.96 to 1:56.23 (PB).

All three men seemed to have trained quite differently through lockdown and it was deserved reward for their respective discipline during that time. Behind them, 15-year-old Gian-Luca Robilliard was the standout performer as he committed to the race gamely and went under 2min for the first time.

Abi Galpin wasn’t the only UK leader on display in the 100m as Josh Allaway predictably took the male honours. He matched his socially distanced legal SB of 11.08 although this time he achieved it without being challenged and with a slight headwind (-0.7). The youngsters scrambled for places behind him and decent clockings around the 12sec mark despite the changing wind.

Galpin predictably took another victory in the women’s race but was challenged closer by Gallagher on this occasion with 12.42 to 12.65 (-0.3). Vicky Mann too went under 13sec again with 12.96. Tilly Beddow led home a number of sub-14sec junior girls in the support race.

Away from the track, a returning Ali Higgins was arguably the most eye-catching performer in the field. James Bougourd was again solidly over 50m but couldn’t match his opener from 2 weeks ago, so it was Higgins’ claiming an Island Games A Standard of 32.81m which stood out. The Vale Primary School teacher had previously suggested that a comeback may be on the cards having taken home a bronze medal the last time the Island Games were held on Channel Island shores back in 2015.

Tim Ap Sion impressed in the high jump with an effort of 1.69m despite minimal training for the event in recent months.

Full results are below and on Power of 10.

Video coverage provided by Chris Chalmers and Lee Garland, click on their names to access other videos.

Photos courtesy of Martin Gray and are available to view here