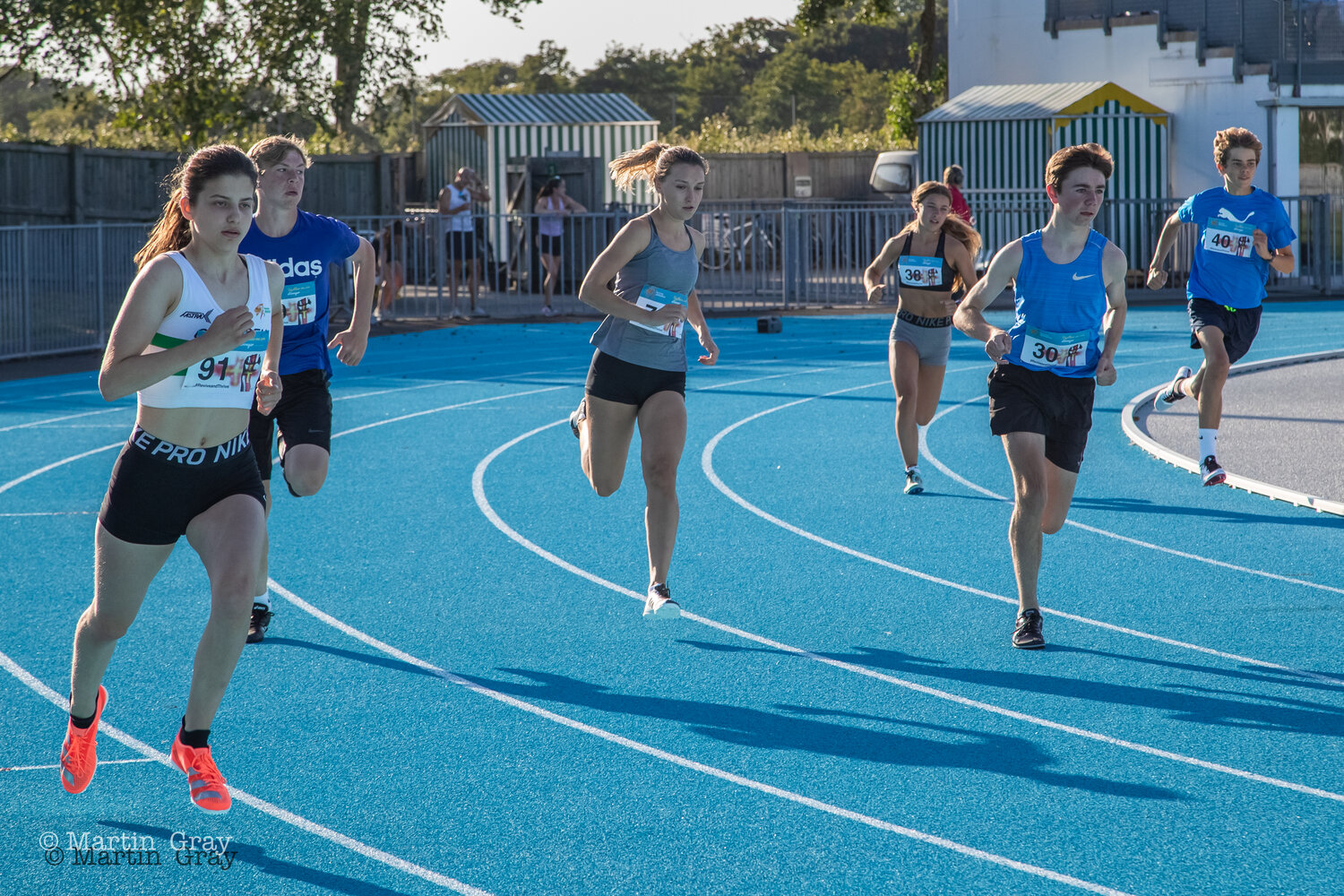 An evening for the youngsters to shine

The first Thursday evening meet of the track and field season saw a number of youngsters steal the limelight from the recent established headline grabbers Abi Galpin and Chris Bain.

It was Chris’ younger sister Kate (above, far left) who arguably posted the most impressive performance of the night overall – as she moved up to tie her brother’s equivalent 7th place in the Guernsey all-time 800m list with a new best of 2:17.64. It is a somewhat stellar list of athletes above her, all of whom have Island Games medals in their trophy cabinets.

Chris predictably won the main 800m race, but was disappointed to only stop the clock at 1:55.62 ahead of Alex Rowe’s 1:56.22. Bain said afterwards that he did not feel as fresh as he had during his recent PB race at any point during the 2 laps and thus unfortunately the 1:54 range wasn’t in his legs this time around. A significant headwind around the final bend severely hurt him and all the 800m runners during their final 200m.

Similarly stunted by that stiff wind resistance was the other leading name of the meet, Abi Galpin. She looked to execute a well constructed race but visibly lost time around the bend and was never going to make it up as she headed for the line unchallenged in the home straight. 25.35sec was still an impressive time but left the 19 year old underwhelmed after her recent wind-assisted 24.57sec run. Her 12.51sec 100m led her to conclude afterwards that she’s lacking in speed at this point, having struggled to recover quickly between her race exploits and thus missing training.

More positively on the female sprinting side, Tilly Beddow in particular was impressive in navigating the difficult conditions behind Galpin and posting a PB of 27.59sec – a pleasing time in its own right for the U15 but surely better is to come based upon the struggles of the senior athletes in the wind. She then went on to earn another PB of 13.50 in the 100m just ahead of Eve Walley’s 13.56.

In another race, Vicky Hancock took victory ahead of Amelie Carpentier with an even faster 13.43 to the latter’s 13.61, both PB’s. The standout U13 sprints performance came from Edie Dorrian with 29.17sec over the wind-hampered 200m.

U17 Hancock also debuted over the 80m hurdles, and goes top of the inevitably sparsely populated UK rankings with an impressive 12.58sec, hinting that despite trying training conditions due to Covid-19 she looks like she’s already progressed significantly since her first experience of the U17 specification hurdles back in January. Fellow hurdlers U15 Macy Ozard and U13 Darcey Hodgson both excelled also and clocked PB’s over their respective hurdle distances of 75m and 70m respectively. Both girls had experienced some success in 2019 and now can look to progress further in their second year in their age groups.

Island Games 4x100m gold medallist Josh Duke returned to action following a thigh niggle, and straight away clicked into gear as he streaked away to an Island Games B standard of 11.45sec. He came away slightly disappointed not to break his PB at the first time of asking but can expect plenty more progress as he returns to training. Behind him, Ben Stevens came through late in the race to beat U15 Tim Ap Sion to second place, 12.05 to 12.07. Ap Sion is enjoying a stellar run of form of late in sprints and jumps, and had already claimed one PB prior to that 100m with a solo win in the 200m in 25.25.

It wasn’t all about youth though, as V60 sprinter Chris Chalmers earned a PB over the 200m with 27.65 and V35 runners Toby Mann and Laura Quayle both posted new bests in the 800m.