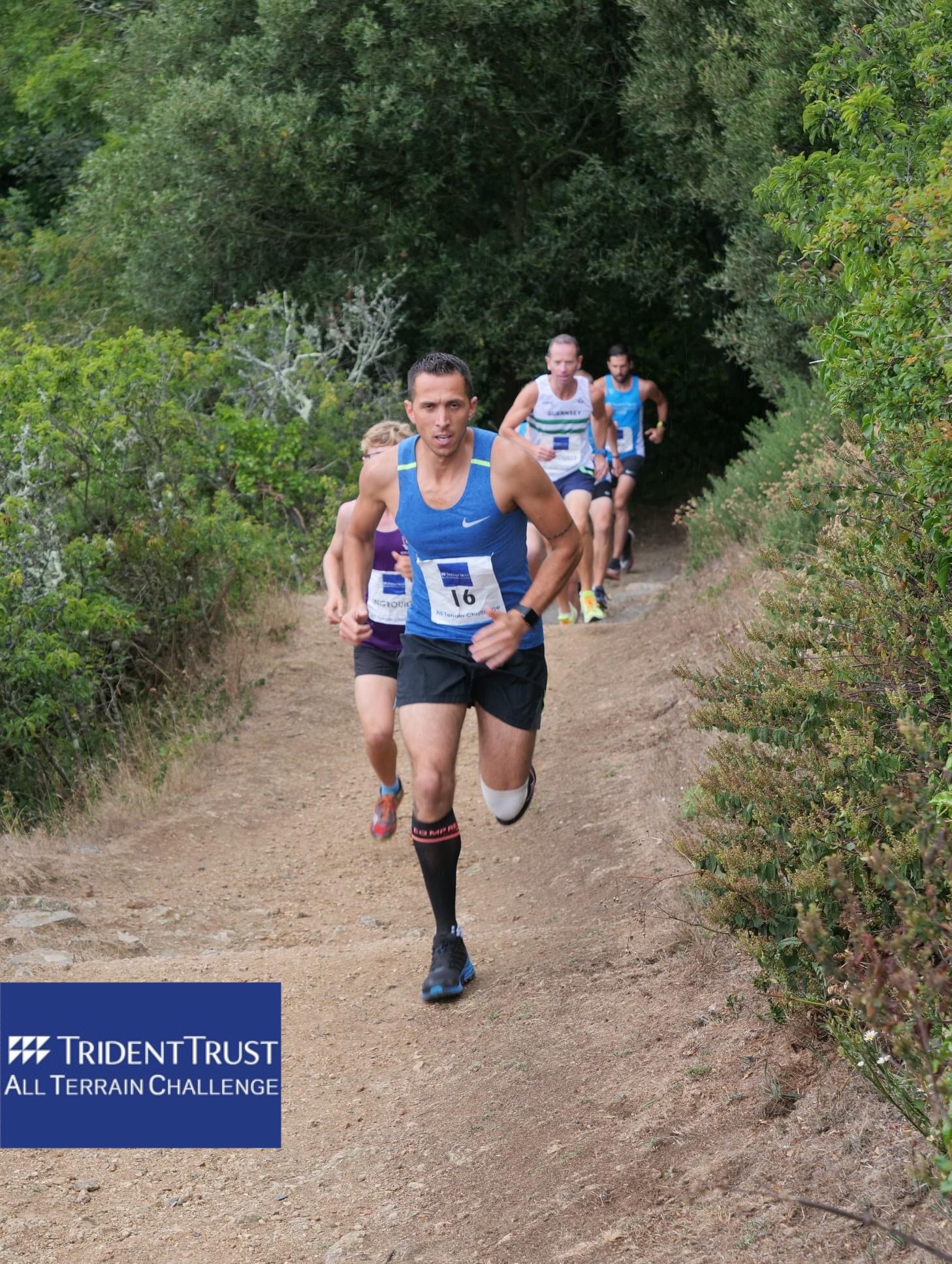 The Mason brothers shared the headlines of the Trident Trust All Terrain Challenge and ensured that this year’s rendition of the seven-day stage race would be one of the closest to date. This came as first-timer Rosie Williams won seven from seven in an impressive clean sweep of ladies’ honours – writes Jamie Ingrouille.

While Ed Mason eventually came out top to seal a hat-trick of consecutive ‘ATC’ titles, such was the competition offered by elder brother George that there were only 30 seconds in it after nearly two and a half hours of racing. But, while undeniably challenging, the stage race offered divisional prizes to athletes of various ability levels and everyone in the near-80 strong entry got to enjoy seven fulfilling days of racing and camaraderie over the many terrains of the Bailiwick.

The stages consisted of:

-Sunday. 5.5k cliffpath run based at Saints Harbour and incorporating six major climbs – aptly described as ‘severe’ by the organisers.

-Thursday. The classic Icart Loop 8k cliffpath run in all its glory.

-Friday. The infamous Jerbourg steps – starting down at the bay to maximise the step count.

-Saturday. The Herm finale on a treacherously sandy and hilly course, distances ranging from 5k for Division Five to 11.7k for Division One.

The ‘battle of the brothers’ motif continued through the whole week. Ed claimed the opening victory, finishing nine seconds clear, followed by two tighter wins. George, who had surprised by holding his brother to within one second at his own game – the 1500m steeplechase event in which he is a former U17 national champion – then crossed the line first at Saumarez, only for both to share the same time.

The classic 8k cliffpath race at Icart played host to the most outstanding performance of the whole week. Ed’s superb 32:38 run ranks him fifth in the all-time standings (according to Paul Ingrouille’s record-keeping) and more than tripled his lead on George, whose 33:07 for runner-up was still a very respectable performance.

Ed topped the standings again at Jerbourg – 1:58 to George’s 2:01 – before his brotherly rival made a late surge to secure the Herm honours and win the finale by 17 seconds. Ed has become the only athlete other than Steve Dawes, the Icart Loop record holder, to win three or more straight ‘ATC’ titles.

The other ‘big name’ in the field was Mike Batiste, who had ramped up his training following several on-and-off years. It soon became apparent that he could not challenge the star siblings but he lived up to his ‘best of the rest’ status with five straight third-place finishes.

The battle for fourth was a recurring theme through the week – James de Garis and both Mikey and Jamie Ingrouille being key protagonists – and in the latter stages, it became a battle for third.

Batiste ended up juggling other commitments and elected to complete a solo time trial of Jerbourg – Division Two runner Marc Isabelle’s 2:10 pipping him by five seconds. Batiste’s decision to skip Herm ultimately led to him slipping from the general classification ‘podium’.

Jamie Ingrouille took third there after a mid-race break from de Garis, who finished fourth, and with the absent Batiste being credited the time of the Division One backmarker, this was reflected in their respective general classification placings.

In Division Two, beyond the climbing glory of Isabelle, it was eventually Sammy Goddard who came out top. The 19-year-old turned several heads with a fine steeplechase debut – placing fifth overall – and also edged divisional victory at Saumarez and Herm. That latter triumph was particularly vital. It allowed him to overtake Michael Le Page, who owed most of his lead to a strong cliff opener, and pinch the division title by just four seconds.

On the women’s end, Williams remained a cut above the remaining contenders. Only on very few occasions has a woman qualified for Division One, but Williams did exactly that. She dethroned reigning champion Mel Nicolle with a string of leading performances and was in fact the fastest woman in every single event. Williams’ best individual placing came on day one as she finished 11th overall, making short work of the cliffy terrain.

The race for that runner-up spot evolved into a compelling week-long rivalry. Three-time past winner Nicolle had a defined upper hand over fellow Division Two runner Caroline Creed on the flat, but the latter eventually took second lady over the course of the seven days.

Creed, a veteran-50 athlete, owed much of this success to her notably smooth running up and down hills and trails. She finished 22nd overall in an eyebrow-raising performance in the cliffpath opener and also made time at Icart, Jerbourg and in Herm for a strong finish to the week.

Emma Beardsell also featured well in the women’s competition, despite racing from Division Three, including a joint second-place finish on time basis in a promising steeplechase outing.

Credit must also go to the new-look day-to-day organisational team of Nathan Ward, Ceejay Merrien and Ben Wilen. The trio helped cover for long-term stalwart Geoff King as the coronavirus pandemic left him unable to travel from Portugal — but King continued to exert his influence from abroad due to the wonders of the internet.