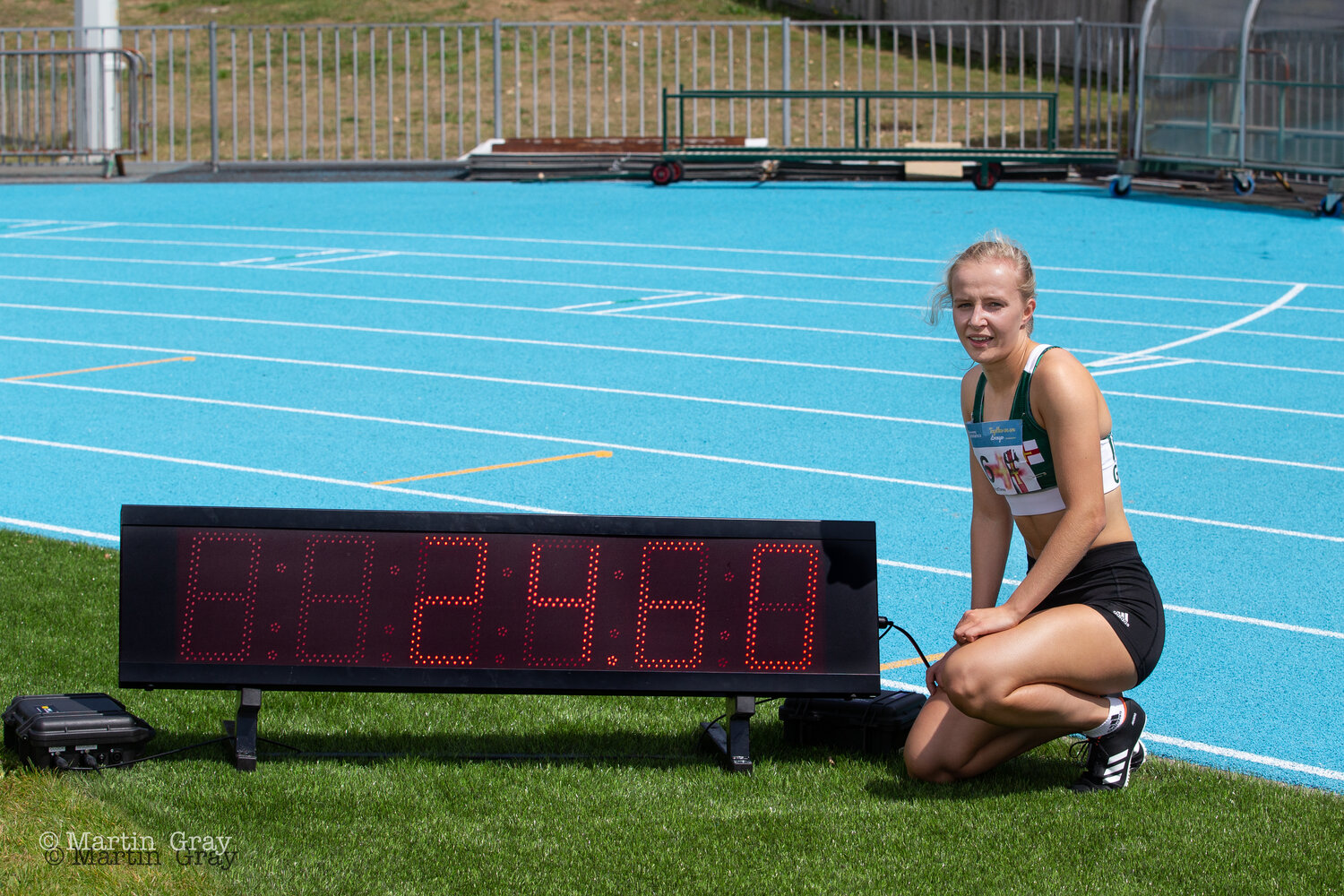 Abi Galpin lead the way on a great day for sprints as she sliced over a third of a second off the Island 200m record and also edged inside the U23 100m mark set by all-time great Kylie Robilliard.

Galpin has had the record in her sights ever since she surprisingly stopped the clock at 24.57sec back on 28th June – unfortunately that day with too much wind assistance to deem the mark legal for record purposes. A rather underwhelming 25.35 in the meantime – coupled with similarly unspectacular 100m performances – only paved the way for a big spike in performance on a day when conditions could have barely been better.

Running against a male athlete for the first time this season in the shape of U17 Alex Falla, 19 year old Galpin was on this occasion able to work off an opponent in the final straight. (Mixed sprint races are eligible for ranking purposes by British Athletics but not by World Athletics.) She chased home Falla’s pleasing PB performance of 24.37sec to fall just 0.03sec outside of her recent wind-assisted time – setting the new Island record at 24.60sec. Not only does it beat Hannah Lesbirel’s 3 year old mark by 0.35sec, but it betters Galpin’s time set behind Lesbirel on that day by an incredible 1.2sec.

The senior 200m record also constitutes an U23 record in the case of Galpin and previously Lesbirel – and in the 100m there was an U23 record set too as Galpin again chased Falla and two other male athletes to the finish line to dip just inside the time set by Robilliard at the Commonwealth Games in 2010 with a time of 12.19sec. Robilliard’s outright senior mark stands at 11.91sec. It was a pleasing finish to an already hugely satisfactory afternoon for the University of Bath student as she achieved her 2020 goal of claiming the U23 records from 60m (indoors) through to 200m. It was also the fastest time by a Sarnian for 6 years.

At the head of the race was 2015 and 2017 Island Games silver medallist Josh Allaway, making his return after a minor foot injury. Without the luxury of having athletes to chase, he demonstrated supreme technical 100m race management to blitz the field with a big seasons best of 10.88sec. It was in fact his fourth best wind-legal 100m ever and comes only a few months after his return from a stint away from the track working in Mauritius. He can now firmly turn his attention towards challenging reigning Island Games champion Joe Chadwick as they vie for Guernsey 2021 glory.

Whilst the two Island Games medalists lit up Footes Lane, they were not alone as youngsters excelled over both of the sprint distances.

The 200m was first, and saw no less than 5 junior girls clock 27sec times – as did race 2 winner, veteran 60 athlete Chris Chalmers. Vicky Hancock, Isabelle Lowe, Amelie Carpentier and Eve Walley followed Chalmers home but it was in an earlier race that another Island record was set as Edie Dorrian took victory in 27.82 to beat a hand-timed 28.0sec time set in 1994 and tied in 2003.

The 100m saw the strong wind change direction slightly for the junior races and therefore they exceeded the legal limit for ranking purposes. However there were still encouraging performances by the junior girls in particular.

The final race went at exactly the right time as the wind settled to a legal 1.2m/s and allowed Allaway and Galpin to set their pleasing SB and PB respectively. Between them, Alex Falla pipped Tim Ap Sion 11.82 to 11.91 to solidify what was a fantastic day for him. It was the first time under 12sec for both youngsters. Vicky Mann clocked her second-fastest ever run, over 2 years since her 12.70 PB, with 12.72sec.

Chris Bain was expected to dominate the 800m and duly obliged without the aid of a pacemaker for the first time this season. The 17 year old is certainly a hot prospect over 2 laps and in this odd year of Covid-19 and seemingly with Alex Rowe turning his attention to 1500m and 5,000m for the rest of the season, Bain is going to need to go it alone. His 1:55.49 fell outside of his PB by over a second but was highly credible given the race circumstances, as was Sam Lesley’s 1:58.55 in second. Henry Lister suffered from a lack of competition to chase but Jack Le Tissier stayed close to him and was rewarded with a PB.

The sprint hurdles was run as a combined affair with Darcey Hodgson getting the better of her older compatriots Macy Ozard and Vicky Hancock – with PB’s for Hodgson and Ozard 12.00 and 12.49 respectively.

James Bougourd was busy in the throws and pleasingly earned his discus victory over Ed Moyse with a PB of 33.95 – the Island Games B Standard is 37m. 2019 Island Games representative Tom Brierley returned to action after a shoulder injury but threw the lighter implement as he eases his way back into competition.

Bougourd fell a couple of metres short of his hammer PB ahead of jumps specialist Jonny Guille.

Guille won the long jump with 6.03m but after the dizzy heights of Thursday’s Field Fest contest the level overall fell a little short as the athletes struggled to deal with the gusting winds. Arthur Aylmer won the high jump in a PB of 1.21m.

Full results are available on Power of 10 by clicking here