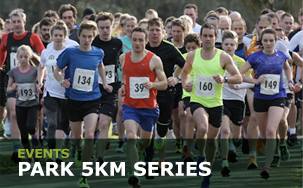 Alex Rowe drew clear of father Alan to post his first senior victory just days after his 17th Birthday and Louise Perrio was leading woman in the final Saumarez Park 5k race of the year.

The race developed like a cross generational version of a Brownlee brothers dual as the father and son duo quickly drew clear of the 60 strong field but Alex looked in control by the halfway stage and ran a strong final half to cross the line 100m clear in 16 minutes 50 seconds.

It was a big personal best for the winner but he was just one of many younger runners who shone.    Sammy Galpin was a strong 5th, a group of even younger juniors peppered the 20 minute mark and 11 year old Summer Woodhead was second female across the line in 28th overall.

Competitive running was not restricted to the youngsters though as several more seasoned competitors also posted season bests  or  personal bests.  In-form Perrio ran a seasons road 5k best of 17:39 for a strong 4th place and regular veteran racer Toby Grice dipped below 18 minutes for the first time and place 6th.

Jez Le Tissier, who raced as a junior on the island chose the event  as an unusual way to celebrate his 50th Birthday with a comeback race and a 28 minute clocking.