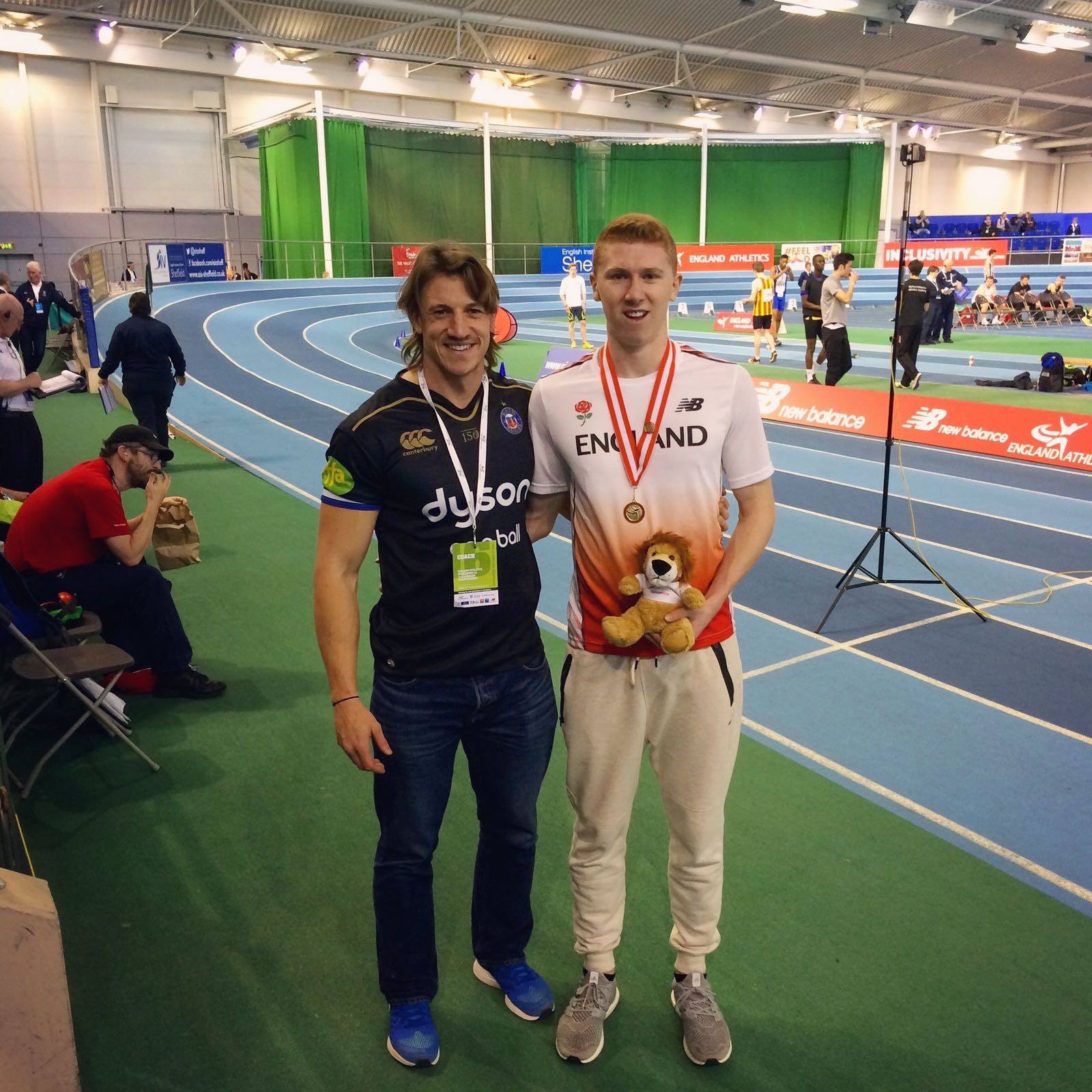 Over the coming months, the website will see more regular “content” from athletes, coaches and other club figures. Blogs will be a regular feature.

Arguably the athlete of 2016 has been Cameron Chalmers – and the last couple of weeks have seen some big changes in his athletics life due to the retirement of his coach, Dan Cossins. Below, he explains why an athlete’s coach is so important to ultimate success on the track.

Someone who has a large impact on your career in Athletics is obviously your coach. I have had numerous coaches since starting athletics at 16 under the guidance of Geoff King. Geoff helped me go from 52.74, which I ran off no training in April, down to 50.29 in August which was an u17 Guernsey record, up until last season where my brother broke it.

I then moved coach to Dale Garland for two seasons, one of which I spent battling recurring hamstring injuries which even carried into the next season and at times pushed me very close to just quitting and going back to football. Although 4 months after my final hamstring injury which ruled me out of the 2015 indoor season I finally ran a PB and broke the sub 50 second barrier for 400m which I was desperate to do, all be it only just in 49.99s. Then 3 weeks later I ran 48.34 which is a race that changed everything for me. I will never be so surprised at the finishing clock that day for the rest of my athletics career I don’t think. That time earned me my first GB vest and I went on to win the Island Games in 48.03 that year. Not many people know how much time and effort Dale put into me over the course of that season where I was always injured. My parents were extremely supportive as always, although Dale, who owed me nothing, went above and beyond what most coaches would ever do to help their athletes. I remember him coming up to Pool running sessions, driving me to the gym and helping me rehab my hamstring, not to mention the countless massages he gave me at unsociable hours. Without Dale as my coach that year I honestly don’t know if I would have ever got back fully fit to run that time in the summer of 2015. 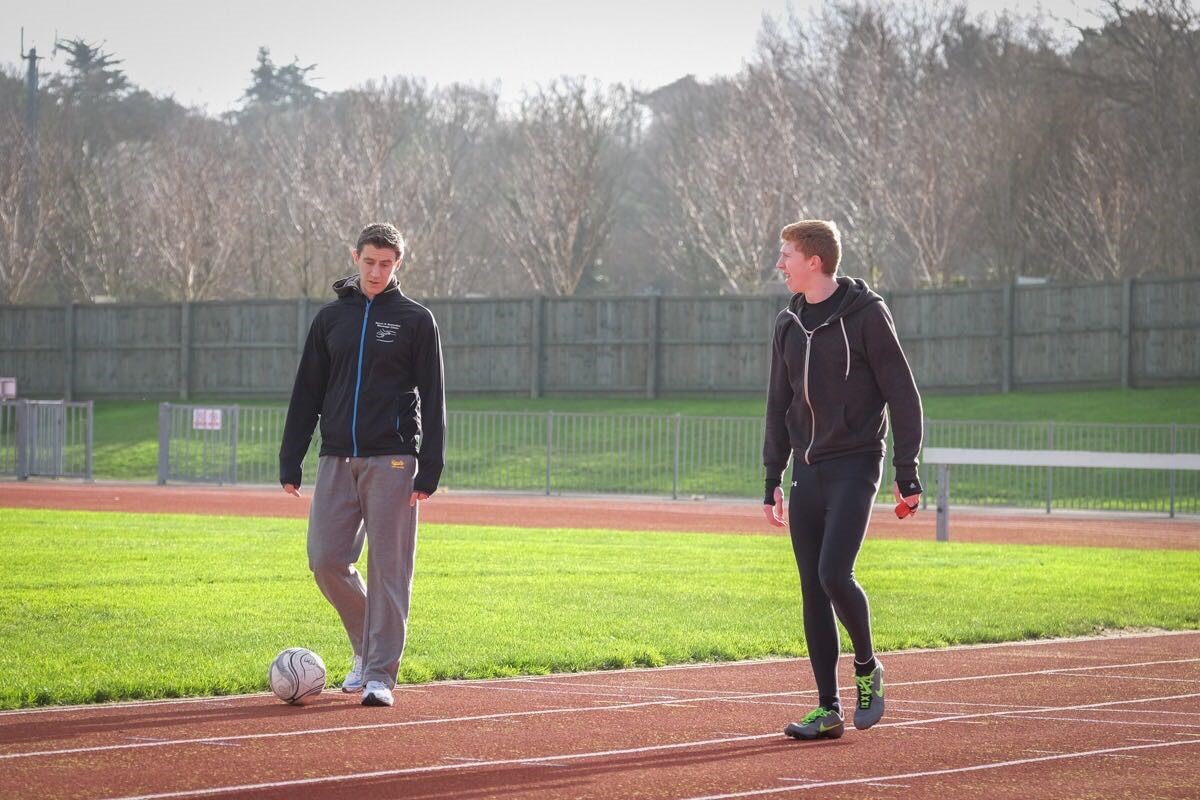 It was in fact the breakthrough I had that summer that made me change my mind about going straight into the work place after finishing sixth form but to instead go to Bath University under the guidance of Dan Cossins to see how fast I could really get.

I started training with Dan in October 2015, which opened my eyes to how some elite athletes trained and how hard they worked as well as what it takes away from the track as well as on it to really run fast and compete at a high level. It’s a lifestyle to be a top class athlete. Sleep, nutrition, stretching, not going out too much by which I mean staying up late and drinking alcohol. Dan helped me understand a lot of these different components and how they all feed into performance come competition time. Some of you may have seen a post on my Instagram recently explaining how Dan is no longer my coach as he is retiring from coaching athletics. In that post I said how the difference between good coaches and great coaches is the ability to understand and treat athletes as humans first rather than just athletic robots. Dan and those close to me know I had a rough few months around November through to the Indoors with certain things not related to athletics or training. This was where having a coach who was supportive and always encouraged us to come to him with any problems, no matter what, was so helpful for me. Dan was always there to offer me advice and talk about things whether they were related to athletics or not. What becomes obvious, is any athlete trains, recovers and competes better when they are happy. That season I went from 48.03 to 46.51 finishing the season ranked number 1 in Europe for u20 400m, winning BUCS and national championships indoor and outdoors as well as finishing 9th at the World Junior Championships for Great Britain. Dan was a huge part of my season and development that year. I still had support from Dale and Tom Druce when I was home in Guernsey who I see as my ‘coaches at home’ as well as friends, and training partners on occasion. Although athletics is an individual sport, I have realised how much of a difference a good coach and training group can make.

I will now be coached by James Hillier who I knew previously from working with him out in Poland at the World Junior Championships. I already know James is a great coach and having had numerous long discussions with him, his approach to coaching and athletics is exactly what I believe I need to go to the next level. Similarly to my experience with Dan, James stressed how it’s so much more than just the sets and reps you do. If all you do is turn up for two hours a few times a week and go home and not think or act in a way conducive to high performance then you will get mediocre results. I’m sure a few reading this may be thinking I’m being slightly hypocritical based off things they have heard or seen on social media recently. It’s fair to say there has been no shortage of drama the past few months although rest assured I am already in great shape and in good hands with James and a very high level training group. To give you an idea of some of my training partners: Theo Campbell (46.02), Ben Claridge (47.7) although he will run significantly faster this season, Leon Reid (20.62) as well as other fast and professional athletes that form an elite group. It is being in that elite environment which makes high performance and full focus the norm that ultimately leads to greater results. One of the main reasons for moving to the UK was to train with people at a very high level and coaches with experience of taking people to world class standards.