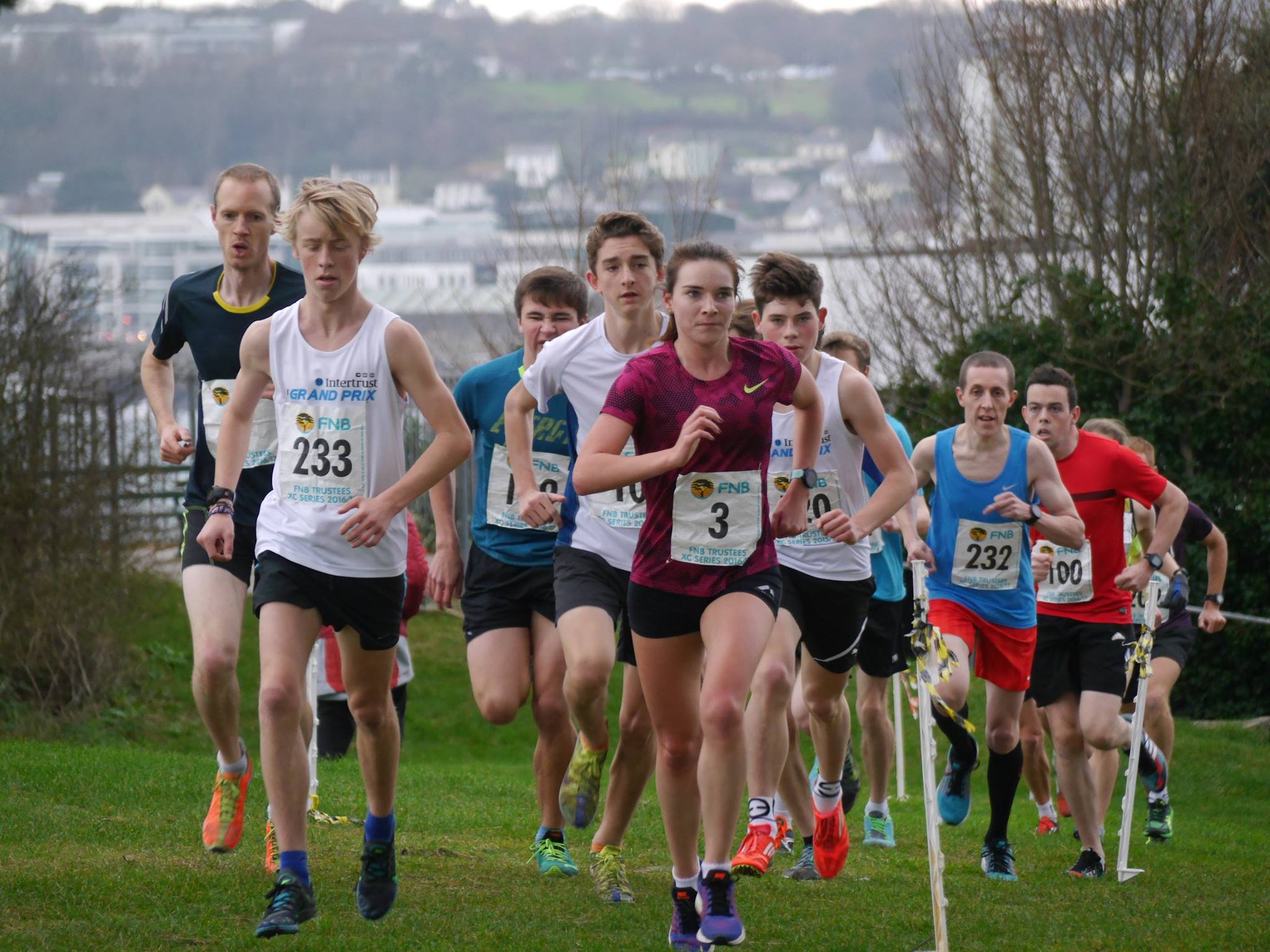 After being hampered by injury in the opening two fixtures Ed Mason(233) got his cross country season back on track with a comfortable win over the 6 mile Delancey course, the third event in the 2016/17 FNB Cross Country series. Carl Holden was a minute adrift in second and Tristan Robilliard outsprinted a returning Pete Amy for third.

Leading woman Sarah Mercier(3)  was 100m clear of Louise Perrio in the 4 mile division two event but Alex Rowe ran strongly to hold off Sam Culverwell and  head the race.

Seventeen year old Mason, silver medallist over 3000m Steeplechase at Jersey’s 2015 island games, has been “putting in solid consistent training” according to his coach Paul Ingrouille but this was his first major senior cross country victory.

The race got off to a tentative start and the main protagonists seemed content to sit behind young Lorcan Gallagher, who went on to  win the two lap race for under 13s. Sarah Mercier briefly hit the front just before the lap point before Mason, Holden and Alex Rowe assumed control as the race entered the second of six laps.  After a comparatively slow 5minute 40 second opening lap Mason was happy to initially play a waiting game and though he drifted to the front a couple of times it was not until just before halfway that he really assumed control and reeled off a succession of 5min 10sec laps to draw 300m clear by the finish line.

A good battle developed between the 4lap/4mile division 2 runners with Rowe approaching the race in a similar fashion to Mason in forcing the pace in the middle stages. 16 yr old mountain biker Sam Culverwell is no slouch as a runner but on this occasion he could not match his slightly older competitor as Rowe came clear with a 29 second margin in 22minutes 15 seconds,  after a committed start Mercier held on well to cross the line in third, just 5 seconds behind Culverwell in 22 minutes 49 seconds,  but a resurgent Louise Perrio ran a strong race to stem the gap to just 21 seconds. There was no rest for Perrio on finishing though – she went on to do 2 more laps and finish a creditable 7th on the Division 1 event. Jenny James was the third woman home in 24 min 54 seconds.

15 year old Louis le Cheminant was a predictable winner of the 3 mile event ahead of a string of his peers but Francesca Bown was one of the main beneficiaries as she ran another solid race and moved to the top of  senior division  4.