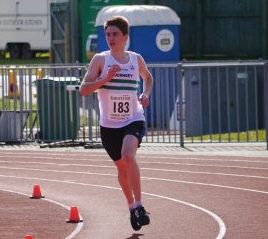 Richard Bartram’s impressive 1500m performance was one of the highlights of an eventful athletics meet on an unassuming morning at Footes Lane, which also fostered several standout performances at U13 level.

The pace had started to dip as a consequence of the fast first lap, but the resilient athlete dug deep in the closing stages to break the coveted four-minute mark for the first time.

‘I think I had it in me with the training and that it was just a case of conditions and getting the pacing right, and it just about worked- I’m pretty happy!’

U13 athletes Kate Bain and Caitlin Jackson put in impressive performances in their respective events, with the latter earning a national top-10 ranking.

Birthday girl Jackson crept up to ninth place in the national U13 javelin rankings with an impressive throw of 30.27m. Her performance, which is also a new age group island record, was a near-three metre improvement on her previous best.

There were also some solid sprint performances despite mild, but persistent, headwinds.

On the other end of the spectrum to the aforementioned youngsters, V55 athlete Chris Chalmers won 100m race C with a personal best of 14.37.

British V50 national medalist Melanie Garland was slightly off her best but still recorded a very respectable 4.20m in the long jump.