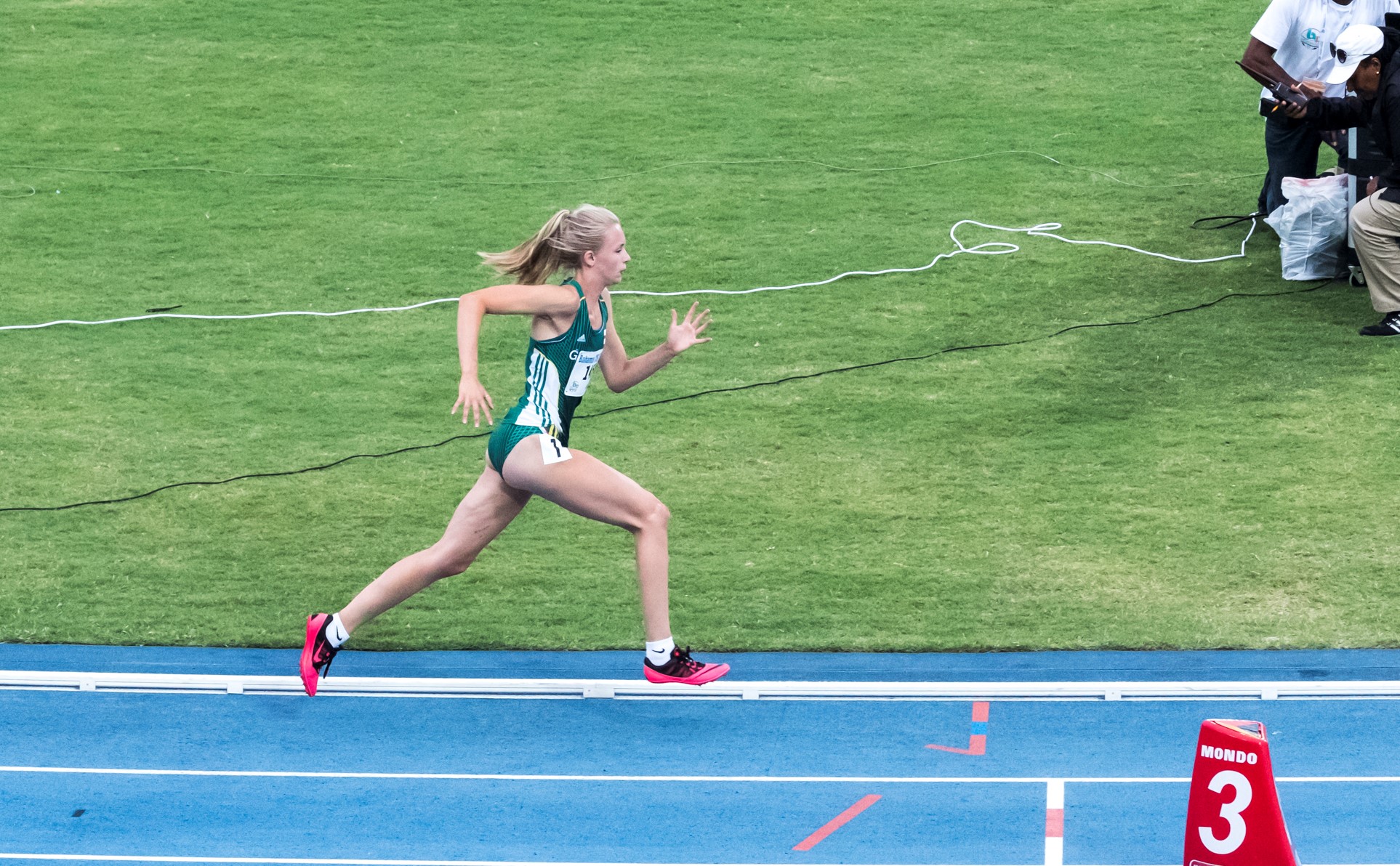 The final Intertrust T&F Challenge series event before the season highlight of the Intertrust Athletics Games saw sprint performances again blunted by a troublesome cross-wind but Sophie Porter (above in action in Bahamas) made light work of it in the 300m hurdles as she recorded her 2nd-fastest time over the distance. It was a solo run for the most-part and good preparation for the national age-group championships which come at the end of the month.

Whilst that emphatic victory was undoubtedly the star performance of the day, runner-up Rhiannon Dowinton also produced a pleasing time as she broke Eliza Mason’s U15 record in posting 47.60sec, just pipping the now U17 Mason on the line (47.80). Dowinton is better known as a sprint hurdles specialist with a talent across the field events as well, but demonstrated good endurance coming off the final barrier.

Porter’s coach, veteran Dale Garland was also in form as he posted his fastest 400m hurdles time since 2012 (54.89). He has endured and up-and-down season including the disappointment of missing the Island Games through injury. He will be in action again at the Intertrust Athletics Games as he bids to finish his season on a high. Another of his protégés, Peter Curtis, posted his second fastest time over the U17 hurdles with 56.66. He was an English Schools finalist in this his first season doing the event and thus will be hopeful of another final at the national championships in two-and-a-half weeks’ time.

There were PB’s amongst the top athletes in the throws as Tom Brierley continued to improve in the discus with 33.33m in the U20, and javelin thrower James Bougourd also showed a level of versatility as he threw a solid 31.00m with the senior implement. All-rounder Dowinton also struck a PB in the U15 shot putt.

Peter Amy’s purple patch continued as he took victory in a PB in the 5,000m with 16:34.45, James Priest also claimed a new best but Sarah Mercier unfortunately was outside her seasons best following injury problems before the Island Games.

Jersey’s Tyler Johnson claimed a sprint double, but his performances were blunted by the stiff west-south-westerly breeze – Teddy Le Clerc looked in good form in coming 2nd in both distances. Indi Gallagher predictably dominated on the women’s side of the sprints and claimed an SB in the 100m.

Joe Yeaman headed the 800m A race as he attacked the 2min barrier again – unfortunately falling just short as he fatigued in the home straight to clock 2:01.67.

Full results are available below and via Power of 10.