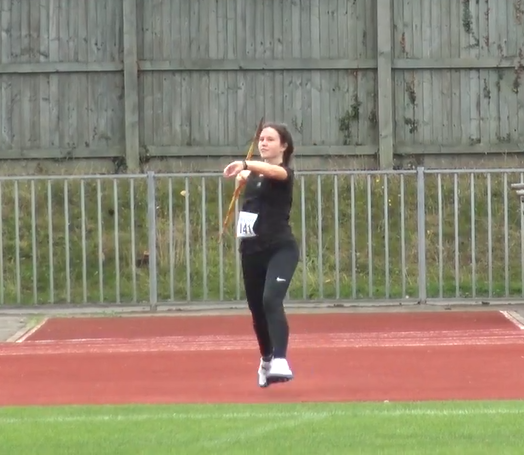 The two girls have been benefiting from a strong-looking throws coaching team this summer and both produced sizeable PB performances in their final competitions of the year. Le Tissier has been consistently over 30m this summer but managed to put almost 2-and-a-half metres on her best with 33.52m. That distance is over a metre beyond the would-be A Standard for the 2019 Island Games – of course the unfortunate situation is that there will be no javelin competitions in Gibraltar. However it does mean that the youngster can look forward to a home Island Games in 2021 so long as she can maintain or improve on her current level of performance. Having struggled with injury for the past two seasons, things seem to be clicking for the 17-year old and she sits 63rd in the UK in the U20 age group for 2018.

The younger thrower Jackson has excelled previously in the U13 age group but is starting to really get to grips with the U15 implement. Like Le Tissier she put over 2m on her PB and in doing so she broke the latter’s U15 Island record, set in 2015. The new mark of 32.27m also ranks her an impressive 37th nationally for 2018.

Also in the field, Jordan Kelly continued his strong late-season form with a windy PB of 12.66m in the triple jump and a wind-legal best of 12.65. The U20 athlete is ranked 68th nationally and looks set to be heading to next year’s Island Games at least in the long jump – though he’s gone on record as saying he is looking beyond 2019 to a home Games in Guernsey.

On the track, there were a few of the Island’s best on display but the strong blustery wind put paid to any truly spectacular times over any distance. U20’s Toby Glass and Peter Curtis went over the senior height 110m hurdles, with the former taking victory but unfortunately falling outside of the Island Games Development Standard in part due to the strong 2.9m/s headwind.

Hannah Lesbirel performed most impressively in the 200m, with her 25.74 only a few tenths down on her seasons best having had to contend with a headwind on the bend as well as the home straight. Debutant Frank Tobin was the best of the men as he considers a change from his current sport of football.

There was an invitational 1500m arranged which saw Richard Bartram take an expected win just outside of 4mins – but Alex Rowe stayed in touch as long as he could and in the process posted a new PB of 4:07.07 to finish off his track season on a high. Rowe has achieved accolades over 800m and 2,000m steeplechase in 2018 and is expected to be selected for at least the 800m for next year’s Island Games.

Over 800m, Sam Lesley took victory ahead of Isaac Powers just outside the 2min mark – but James Priest continued to show his range with a PB of 2:06.47 in third place. In the B race, Alice Loveridge chipped away at her PB again with 2:25.05 in a race won by Mikey Ingrouille.

The U13’s were in action in the final Quadrathlon event of the season and Aideen Le Prevost edged out Tilly Beddow on this occasion largely due to her impressively achieving three PB’s out of the four events on the day. Jack Riley took the victory in the boys’ competition. Quadrathlon results are available to download below.

Results are on Power of 10 here.

Videos are courtesy of Chris Chalmers and further videos are available here.